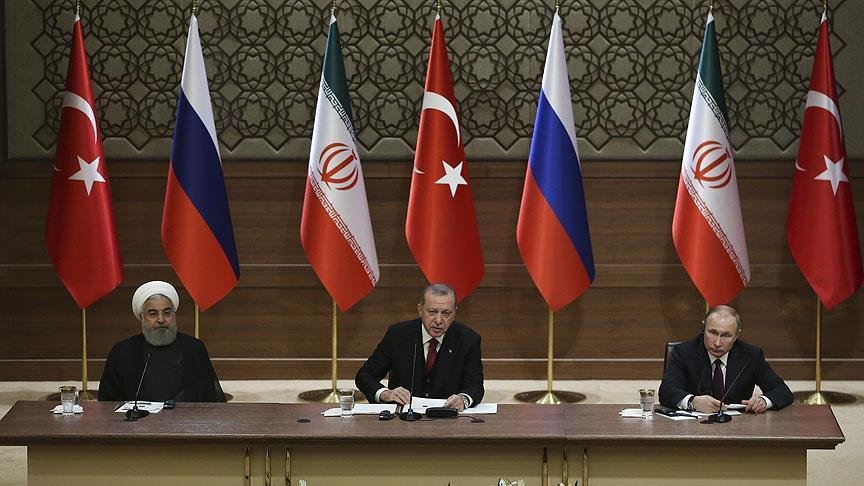 In a joint declaration today, Wednesday after a tripartite summit in the Turkish capital Ankara, the Turkish, Russian and Iranian Presidents stressed their joint resolve to oppose separatism as well as the use of terrorism as an excuse for changing Syria.

It added that they “expressed their determination to stand against separatist agendas aimed at undermining the sovereignty and territorial integrity of Syria as well as the national security of neighboring countries.”

The leaders “expressed their conviction that there could be no military solution to the Syrian conflict and that the conflict could be ended only through a negotiated political process.”

They voiced their commitment “to follow up on the results of the Congress, reflecting the will of representatives of all segments of the Syrian society, in particular the agreement to form a Constitutional Committee, supported by the UN Secretary-General and the international community.”

They reiterated “the necessity to assist the Syrians in restoring the unity of their country and in achieving a political solution of the ongoing conflict through an inclusive, free, fair and transparent Syrian-led and Syrian-owned process based on the free will of the Syrian people and leading to a constitution enjoying the support of the Syrian people, and free and fair elections with the participation of all eligible Syrians under appropriate UN supervision”

They underlined that the Astana, Kazakhstan format “had been the only effective international initiative that had helped reduce violence across Syria and had contributed to peace and stability in Syria, giving impetus to the Geneva process in order to find a lasting political solution to the Syrian conflict,” the statement added.

The presidents also reaffirmed their determination to continue their active cooperation on Syria for the achievement of a lasting cease-fire between the conflicting parties and advancement of the political process as envisaged by UN Security Council Resolution 2254.

The three countries will continue cooperation in order to “ultimately eliminate” Daesh, al-Nusra Front, and all other individuals, groups, undertakings and entities associated with Al-Qaeda or Daesh, said the statement.

The leaders underlined, in the fight against terrorism, that separating terrorist groups from armed opposition groups that had joined or would join the cease-fire regime carries utmost importance for preventing civilian casualties.

The presidents also underscored their joint determination to “speed up their efforts to ensure calm on the ground and protect civilians in the de-escalation areas as well as to facilitate rapid, safe and unhindered humanitarian access to these areas”

They stressed that the creation of de-escalation areas was temporary as provided for under a May 2017 memorandum.

“They called upon the international community, particularly the UN and its humanitarian agencies, to increase its assistance to Syria by sending additional humanitarian aid, facilitating humanitarian mine action, restoring basic infrastructure assets, including social and economic facilities, and preserving historical heritage,” the statement said.

The statement also took note of developments on Syria since their previous meeting last November in Sochi.

The last summit was held in Russia’s Black Sea resort of Sochi on Nov. 22 to discuss progress made in the Astana peace talks and changes in Syria’s de-escalation zones.

One of the decisions made at the summit was to hold the next one in Iran, at Rouhani’s invitation.