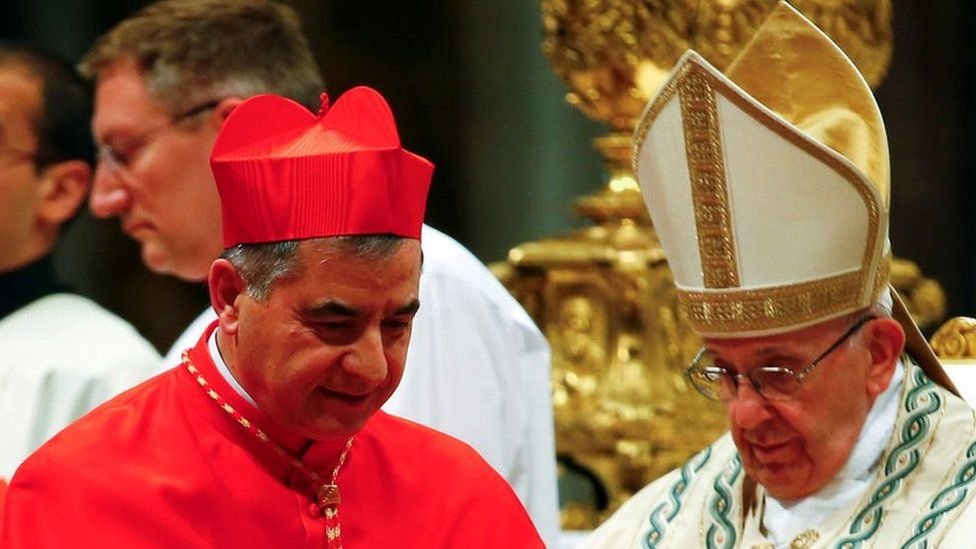 A prominent Italian cardinal was among 10 people sent to trial in the Vatican on Saturday charged with financial crimes including embezzlement, money laundering, fraud, extortion and abuse of office.

Cardinal Angelo Becciu, formerly a senior official in the Vatican administration, as well as two top officials at the Vatican’s Financial Intelligence Unit will go on trial on July 27 over a multi-million euro scandal involving the Vatican’s purchase of a building in one of London’s smartest districts.

The trial will inevitably bring a swirl of media interest to the tiny city-state surrounded by Rome, and appears to underscore Pope Francis’ determination to cure the rot in Vatican finances, even if it involves messy public hearings.

Becciu, 73, whom the pope fired from his senior clerical post last year for alleged nepotism, and who has always maintained his innocence during a two-year investigation, becomes the most senior Vatican official to be charged with financial crimes.

The pope personally gave the required approval last week for Becciu to be indicted, according to a 487-page indictment request seen by Reuters. The Vatican announced the indictments in a two-page statement.

The charges against Becciu include embezzlement and abuse of office. An Italian woman who worked for him was charged with embezzlement and the cardinal’s former secretary, Father Mauro Carlino, was accused of extortion.

Becciu said in a statement that he was a victim of a “machination” and reaffirmed his “absolute innocence”.

In a statement Saturday issued by his lawyers, Becciu insisted on the “absolute falsity” of the accusations against him and denounced what he said was “unparalleled media pillory” against him in the Italian press.

“I am the victim of a plot hatched against me and I have been waiting for a long time to know any accusations against me, to allow myself to promptly deny them and prove to the world my absolute innocence,” he said.

Carlino’s lawyer said his client was innocent, had been “acting under orders”, and had saved the Vatican millions of euros. He said starting a trial so soon did not give defence lawyers enough time to prepare.

Two Italian brokers, Gianluigi Torzi and Raffaele Mincione, were charged with embezzlement, fraud and money laundering. Torzi, for whom Italian magistrates issued an arrest warrant in April, was also charged with extortion.

There was no immediate response to attempts to reach their lawyers, but both men have consistently denied wrongdoing.

Four companies associated with individual defendants, two in Switzerland, one in the United States and one in Slovenia, were also indicted, according to the document.

The investigation into the purchase of the building became public on Oct. 1, 2019, when Vatican police raided the offices of the Secretariat of State, the administrative heart of the Catholic Church, and those of the Vatican’s Financial Information Authority (AIF).

The then-president of the AIF, Rene Bruelhart, a 48-year-old Swiss, and AIF’s former Italian director, Tommaso Di Ruzza, 46, were charged with abuse of office for allegedly failing to adequately protect the Vatican’s interests and giving Torzi what the indictment request called an “undue advantage”.

Di Ruzza was also accused of embezzlement related to alleged inappropriate use of his official credit card, and of divulging confidential information.