US Reinstates Tough Iran Sanctions Amid Anger in Tehran 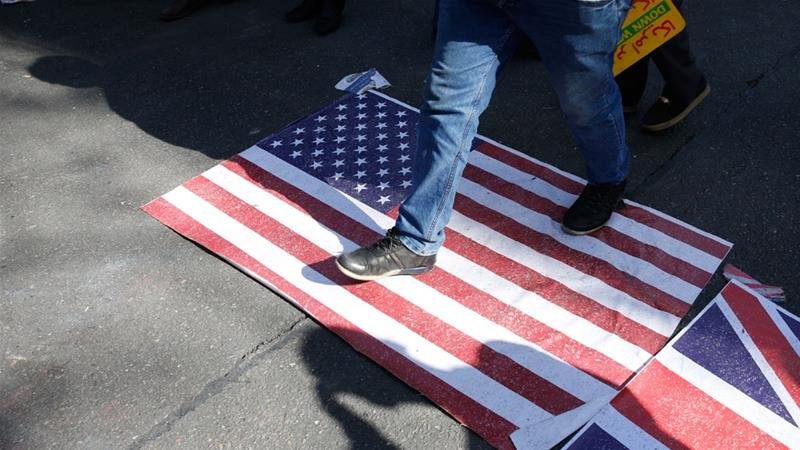 The United States has reimposed oil and financial sanctions against Iran, significantly turning up the pressure on Tehran in order to curb its alleged missile and nuclear programmes.

The move on Monday will restore US sanctions that were lifted under a 2015 nuclear deal negotiated by the administration of President Barack Obama, and add 300 new designations in Iran’s oil, shipping, insurance and banking sectors.

“America wanted to cut to zero Iran’s oil sales … but we will continue to sell our oil … to break sanctions,” Rouhani told economists at a meeting broadcast live on state television on Monday.

Ministry of Foreign Affairs spokesman Bahram Qasemi told state TV that the new sanctions are part of a psychological war launched by Washington.

“[US President Donald] Trump’s administration is addicted to imposing sanctions … America’s economic pressure on Iran is futile and part of its psychological war against Tehran,” Qasemi told a weekly news conference.

“Many Iranians we speak to here tell us consistently that they have come to learn the only language the United States understands is the language of strength.”

Before a campaign rally for the US midterm elections, US President Donald Trump on Sunday said that Iran was already struggling under pressure by his administration.

“The Iran sanctions are very strong; they are the strongest sanctions we have ever imposed. And we will see what happens with Iran, but they’re not doing very well, I can tell you,” he said.

Trump announced in May that his administration was withdrawing from what he called the “worst ever” agreement negotiated by the US and reimposed a first round of sanctions on Iran in August.

Other parties to the deal, including Britain, France, Germany, China and Russia, have said they will not leave.

The Foreign Ministry’s Qasemi said Iran is in constant contact with other signatories of the nuclear deal that saw most international financial and economic sanctions on Iran lifted in return for Tehran curbing its disputed nuclear activity under UN surveillance.

“We are in regular contact with other signatories of the nuclear deal … setting up mechanisms to continue trade with the European Union will take time,” Qasemi told a weekly news conference in Tehran.

China, India, Italy Japan, Greece, South Korea, Taiwan and Turkey – all top importers of Iranian oil – are the eight countries granted temporary exemptions from the sanctions to ensure crude oil prices are not destabilised, US Secretary of State Mike Pompeo announced on Monday.

Earlier, thousands of Iranians rallied to mark the anniversary of the seizure of the US embassy during the 1979 Islamic Revolution.

“I want to say something to America and its weird president,” Jafari said.

“Never threaten Iran, because we can still hear the horrified cries of your soldiers in the [desert] … and you know it better, how many of your old soldiers in American society commit suicide every day because of depression and fear that they suffered in battlefields.

“So, don’t threaten us militarily and don’t frighten us with military threats,” he added. Over the past year, Tehran has accused Trump of waging “economic warfare” and devastating its economy.

In his speech, Jafari assured the crowd that Trump’s attacks on Iran’s economy were a desperate attempt to defeat the republic and were doomed to fail.

But his optimistic tone stood in stark contrast to the widespread economic chaos Iran has endured during the past 12 months, including a nosedive in the value of its currency, a shake-up of President Hassan Rouhani’s economic team – which saw several senior ministers dismissed – and nationwide protests against price increases and dire economic conditions.

Based on the figures from the Organisation of the Petroleum Exporting Countries (OPEC), Iran’s petroleum exports hit $52.728bn in 2017. Its crude oil exports stood at 2,125,000 barrels per day during the same year, while its natural gas exports reached 12.9 billion cubic metres.

Those numbers, however, have already dropped in the current year.

Iran’s energy sector accounts for up to 80 percent of the country’s income from exports, according to the US Energy Information Administration, so a disruption could bring serious pain to its financial bottom line and its people.

Aside from the energy industry, others outfits and activities being sanctioned include: