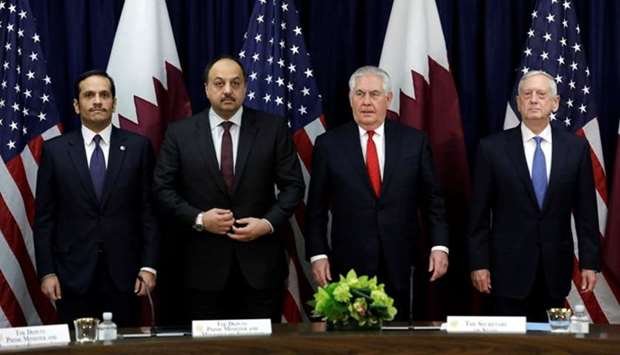 US top officials praised today Qatar’s counterterrorism efforts and highlighted the strong relations between the two countries. Both sides also stressed the need to work towards a solution to end the Gulf crisis. Present at the opening of US-Qatar Strategic Dialogue today at the State Department were Rex Tillerson, US Secretary of State, Jim Mattis, US Secretary of Defence, Sheikh Mohamed bin Abdulrahman Al-Thani, Qatar Dy. Prime Minister and Minister of Foreign Affairs,  and Dr Khalid bin Mohamed Al-Attiyah, State Minister of Defence and Dy. Prime Minister of Qatar.

Both parties discussed areas of co-operation in fields of Trade and Investment, Security, Counterterrorism, Energy and Aviation.

US Defence Secretary said on the occasion that ‘Qatar is a strong partner and a longtime friend of the United States. We value the US-Qatar relationship and hope the talks deepen our strategic ties.’ He said that ‘The United States believes enhanced trade will contribute positively to both our countries’ economic development, and create jobs for the American people and Qatari citizens while furthering the region’s security and stability.’

In a statement issued by the US Department of State, Tillerson said that with respect to counterterrorism, “following President (Donald) Trump’s challenge to all of our Gulf partners during the Riyadh summit last year, Qatar has made significant progress to improve efforts to combat terrorism”.

“As a result of the memorandum of understanding our countries signed in July (last year), the United States and Qatar have increased information sharing on terrorists and terrorist financiers. We have participated in counterterrorism technical training and taken steps to improve aviation security. We look forward to building on this foundation and implementing next steps,” he observed.

He also announced that the US and Qatari governments will sign a memorandum of understanding (MoU) that creates a framework for the US to provide technical assistance and training to the Qatari government on combatting human trafficking. The MoU also provides for the creation of a bilateral government working group to discuss labour practices in Qatar. “Through our continued co-operation, we hope to partner with Qatar to build institutional capacity to eliminate human trafficking, an area in which Qatar has already made significant strides,” he said.

In discussions between both the officials, among other issues including critical regional security, battle to defeat ISIS, Gulf crisis, Syrian situation, Iraq, Afghanistan and Iran’will also be discussed.

Tillerson said on the Gulf crisis “As the Gulf dispute nears the eight-month mark, the United States remains as concerned today as we were at its outset. This dispute has had direct negative consequences economically and militarily for those involved, as well as the United States.”

US Defence Secretary said “A united GCC bolsters our effectiveness on many fronts, particularly on counterterror.”

Mattis, too, stressed that the US enjoys a longstanding defence relationship with Qatar. “A strong and valued military partner, Qatar is a longtime friend in the region. Even in the midst of its own current challenges, Qatar and the United States maintain excellent military-to-military relations, hosting the Al Udeid Air Base, home to our Combined Air Operations Center, the United States Air Force Central Command Forward Headquarters, and US Central Command’s Forward Headquarters, providing critical counterterrorism support to the Defeat ISIS/Defeat Daesh coalition and President Trump’s South Asia strategy,” he said.

“We are grateful to Qatar for their longstanding support of America’s present and continuing commitment to regional security, a commitment that includes information sharing and counterterrorism training. It should be noted that just this last week, the Qatari Air Force completed its first two C-17 flights from the Gulf to Afghanistan and back, providing logistical support to the Nato counterterrorism campaign in Afghanistan,” he continued.

“As Secretary Tillerson stated, a united Gulf Co-operation Council bolsters our effectiveness on many fronts, particularly on countering terrorism,” Mattis added. “It is thus critical that the GCC recovers its cohesion as the proud Gulf nations return to mutual support through a peaceful resolution that provides for enhanced regional stability and prosperity.

“I look forward to a lasting Qatar-US security relationship, a relationship that will continue to bolster our efforts against common security threats and violent extremism.”

Tillerson said the two countries were to sign a number of documents outlining co-operation in the important bilateral and regional areas mentioned, including three at the opening session.

The first was a memorandum of understanding that establishes the convention for this US-Qatar Strategic Dialogue on an annual basis going forward, “so that we can continue to build on the close partnership between our two countries”.

The second document is a joint declaration outlining US co-operation with Qatar on matters of shared regional and security interests, while the third is a memorandum of understanding that creates a framework for the co-operation between the US and Qatar to combat human trafficking.

He also noted that the US welcomed the understanding they reached on civil aviation.

Doha, 25 June 2022 THE Embassy of Nepal and the Non-Resident ...
END_OF_DOCUMENT_TOKEN_TO_BE_REPLACED