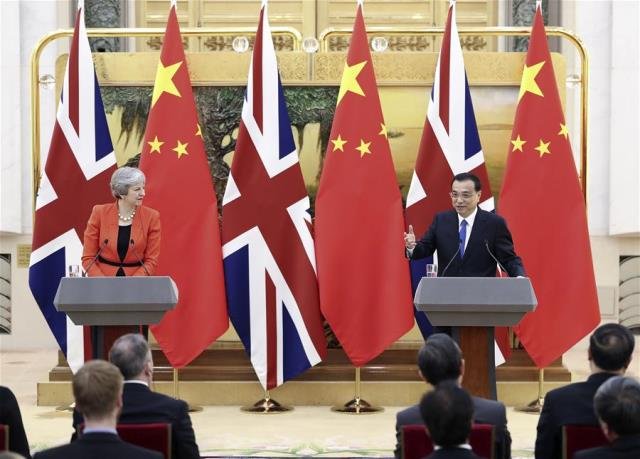 Chinese President Xi Jinping met with visiting British Prime Minister Theresa May here on Thursday, calling on both countries to work for the healthy and steady development of bilateral ties in the new era.

China and Britain on Wednesday signed a dozen of deals on areas including trade, finance, health care and smart city, pledging to further promote the Golden-Era strategic partnership.

The agreement came as British Prime Minister Theresa May arrived in Beijing and held a China-Britain annual meeting between heads of government with Chinese Premier Li Keqiang at the Great Hall of the People in downtown Beijing.

Hailing that China-Britain relationship has been at the forefront among the ties between China and Western countries, Li said China attaches great importance to the ties with Britain.

It is both in line with the two countries’ interests and conducive to world peace, stability and prosperity that China-Britain relationship continues to develop in a steady way, he said.

Li said China’s relations with Britain will not be changed by the changes in Britain-EU relations.

China stands ready to further promote bilateral ties in the principle of mutual respect, equality, and mutual benefit, he said.

Noting that both countries are at a crucial stage of development and enjoyed broad prospect of all-round mutually beneficial cooperation, Li called on China and Britain to take the opportunities and work together to forge ahead the Golden Era partnership at a new historic point.

China and Britain agreed to embrace a “Golden Era” for bilateral relations in October 2015.

Li called on both countries to strengthen cooperation on Belt and Road Initiative and areas including nuclear energy, high-speed train, finance, high-tech trade, third party market, and expand investment in both ways.

China agrees to accelerate the final preparations for the Shanghai-London Stock Connect and to review the timeline for its launch when conditions permit, Li said.

China announced Wednesday it has allowed a British bank to offer lead underwriting services for certain types of Panda bond issuances, as part of its efforts to open up the financial market. Li said the move was conducive to finance cooperation.

Noting that the world economy has shown signs of recovery, Li said all parties need to cherish the momentum to forge ahead trade and investment liberalization and facilitation, and economic globalization.

He called on countries to send strong signals of cooperation and win-win so that world markets will have stable expectations.

Echoing Li’s remarks, May said she hopes her visit can further lift the Golden Era partnership with China to a new high.

The economies of Britain and China are highly complementary to each other, she said, adding that it is in the interest of both countries and both peoples to maintain the sound momentum of the bilateral trade and investment.

Both Britain and China support globalization and oppose trade protectionism, she said.

Britain is willing to promote the cooperation with China on Belt and Road Initiative, said May, calling on both countries to explore cooperation on innovation, finance, intellectual property protection and artificial intelligence.

Noting her country welcomes more investment from China, May said she appreciates China’s efforts in reviewing the timeline for the launch of the Shanghai-London Stock Connect.

This is May’s first official visit to China since she took office in 2016.

May, who kicked off her three-day visit to China in the city of Wuhan on Wednesday, is accompanied by leaders of over 50 British business and commercial organizations.