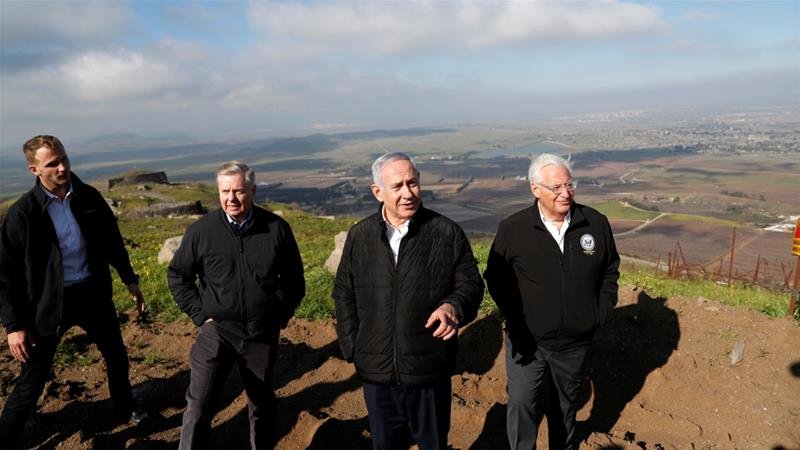 The United States no longer refers to the Golan Heights as an “Israeli-occupied” territory in its latest annual human rights report, published on Wednesday, though the State Department insists the wording change doesn’t mean a policy change.

The report now calls the area the “Israeli-controlled Golan Heights”.

When asked about the change on such a sensitive Middle East subject, a senior US official told reporters in Washington: “There’s no change in our outlook or our policy vis-a-vis these territories and the need for a negotiated settlement there.”

“This, by the way, is not a human rights issue, it’s a legal status issue,” said Michael Kozak of the State Department’s Bureau of Democracy, Human Rights and Labor.

“What we try to do is to report on the human rights situation in those territories, and so you’re just trying to find the way of describing the place that you’re reporting on,” he said. “And ‘occupied territory’ has a legal meaning to it; I think what they tried to do is to shift more to just a geographic description.”

Another semantic change that appeared in last year’s report showed up again this year, with a section titled “Israel, Golan Heights, West Bank and Gaza,” instead of its previous “Israel and the Occupied Territories” heading.

Nabil Abu Rudeineh, spokesperson for Palestinian Authority President Mahmoud Abbas  said that the US dropping the term “occupation” from the Occupied Palestinian Territories and the Syrian Golan Heights is “a continuation of the hostile approach of the American administration toward our Palestinian people and is contrary to all UN resolutions.”

He stressed, “These American titles will not change the fact that the Palestinian territory occupied since 1967 and the occupied Arab Golan are territories under Israeli occupation in accordance with UN resolutions and international law,” Abu Rudeinah said, as reported by Palestinian news agency Maan.

“Both human rights groups and journalists are raising questions about whether the Trump administration is trying to stay on the right side of the government of Prime Minister Benjamin Netanyahu in Israel by removing this language,” she said, speaking from Washington, DC.

US President Donald Trump, who has shown robust support for his country’s close ally Israel, recognised Jerusalem as the country’s capital in 2017, defying international consensus and much to the chagrin of Palestinian leaders, who view Israeli-annexed East Jerusalem as the capital of their future state.

Israel seized much of the Golan Heights from Syria during the 1967 Six-Day War and then effectively annexed it in 1981, a move that was never recognised by the international community.

Israel and Syria remain technically at war after the 1973 War, though a demilitarised border zone established through an armistice had long been relatively calm until the start of the Syrian civil war in 2011.

Influential Trump ally US Senator Lindsey Graham said on Monday during a visit to the Golan Heights with Israeli Prime Minister Benjamin Netanyahu that he would push for US recognition of Israel’s sovereignty over the strategic region “now and forever”.

Last month, US Senators Marco Rubio, Ted Cruz, Tom Cotton and Congressman Mike Gallagher introduced legislation in the House of Representatives and the Senate to recognise Israel’s sovereignty over the occupied Golan.