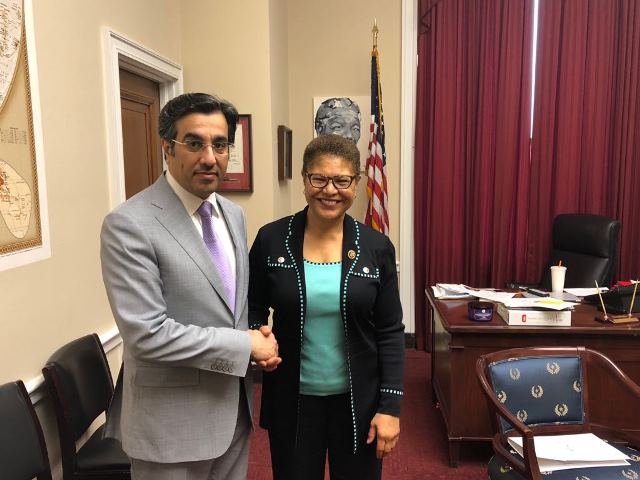 Dr. Ali Samikh AlMarri, Chairman, National Human Rights Committee of Qatar along with member of Tom Lantos  Committee of US Congress, calls on US President to address on priority the issue of victims of the illegal siege imposed by it’s neighboring countries in forthcoming meting at Camp David to resolve the Gulf Crisis.

During his series of meetings with a number of parliamentarians included Karen Bass, an active member in the subcommittee on global human rights. Republican Francis Rooney, representative of Foreign Affairs Committee and Congress representative Tom Garrett, a member of Sub-Committee on Universal Human Rights,  Congressman Brad Shermin, a Democrat in the Foreign Relations Committee.

Dr Ali AlMarri stressed on lifting  immediately the embargo considering on urgent basis the plight of victims and human rights violations caused by the embargo.

He asked for compensation to the affected citizens of State of Qatar and residents on its territory and citizens of the siege states. “We will continue to follow closely all the Camp David arrangements so that we can see the necessary guarantees that the humanitarian issue will not be floated in any political settlement,” he said.

He said that without justice to these victims and compensation of damages,  any dialogue on solution will be considered failure.

He said that “From our perspective, we see that the current Gulf crisis has cast a shadow over the human rights situation. Civilians are the biggest losers in this crisis. Any consultations to resolve the crisis must precede proactive measures that take into account the pressing humanitarian situations so that the solution is not at the expense of human rights and Victims.

Dr. Al-Marri presented in detail on human rights violations caused from siege and told that siege countries are ignoring calls from international organizations and the National Human Rights Committee rather are violating continuously  human rights thus damaging social fabric of the Gulf States. “The unity and cohesion of the Gulf Cooperation Council depends on a cohesive social fabric. We can not talk about that unity. We see the Gulf families dispersing and spreading in their media institutions the discourse of hatred, incitement and violence. Therefore, one of the most important steps to resolve the crisis is to immediate end the suffering of families, and to compensate to victims.

He said that any economic crisis due to this siege will not only disrupt on-going development of Qatar but may of the region and beyond that since the siege has left a growing sense of insecurity and confidence in the economic and social sector since  it has resulted in heavy financial losses to individuals and a number of major international companies operating in the Gulf region.

Dr Ali AlMarri said that it is very clear from on-going human rights violations from these siege states they want to damage the unity among Gulf Cooperation Council, as well as to disrupt families and inter-state investments.

It was second time since first his presentation in October 2017 by Dr. Ali AlMarri before  Tom Lantos Committee.

Tom Lantos followed the first meeting with a public hearing at the headquarters of Congress, during which they discussed the repercussions of the humanitarian siege imposed on Qatar and its negative effects on citizens and residents of Qatar.