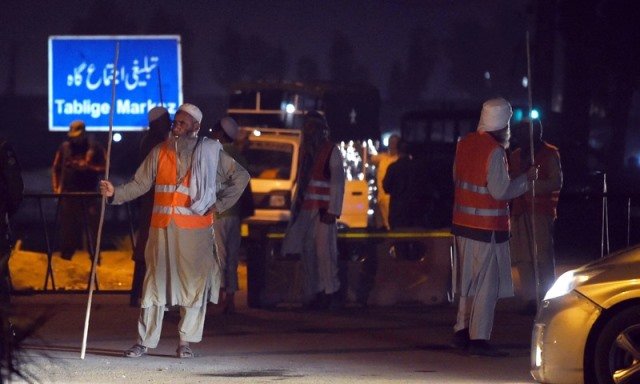 At least eight persons, including five policemen, lost their lives and 20 others were injured in a suicide attack which targeted a police check post in Raiwind on the outskirts of Lahore, Punjab Health Minister Salman Rafique told DawnNewsTV.

Deputy Inspector General (DIG) Operations Dr Haider Ashraf confirmed that it was a suicide blast which ripped through a police check post located on Raiwind Road leading towards the ground where ijtima (congregation) of Tableeghi Jamaat is held.

The police camp was set up for the security of an ongoing congregation of Tableeghi Jamaat.

The senior police official said initial reports suggest that a motorcycle was used to carry out the suicide attack, adding that investigations were underway out to identify and locate the accomplices of the alleged suicide attacker.

Moreover, evidence was collected by the Bomb Disposal Squad from the site of the blast for further investigation.

DIG Ashraf said body parts of the suicide bomber were recovered from the explosion site and sent to the forensic lab for further examination.

The senior police official stressed that if the suicide attacker had managed to enter the congregation site, the death toll could have been much higher.

Rescue 1122 teams shifted the injured policemen and civilians to nearby hospitals, where an emergency has been imposed.

Security has been tightened following the attack and all exit and entry points to the vicinity have been secured. A search operation in the surrounding area has also been launched.

Punjab Chief Minister Shahbaz Sharif was quick to condemn the blast. He “sought a report from Inspector General Police” and directed the authorities to provide “best possible medical facilities and treatment to the injured persons”, read a statement issued by the provincial government.

Meanwhile, IG Punjab Arif Nawaz Khan has ordered the force to declare a security high alert across the province.

No group has yet claimed responsibility for the attack.

In July last year, at least 26 people, including nine policemen, were martyred while 58 others were injured in a bombing attack near the Arfa Karim IT Tower on Lahore’s Ferozepur Road. It was also a suicide attack targeting police and involved a motorcycle as well.

The Tehreek-i-Taliban Pakistan (TTP) had claimed responsibility, stating that a “suicide attacker” had used  a motorcycle bomb to target police officials.

In February 2017, six police officials, including two senior officers, were martyred when a suicide blast claimed by a Taliban faction ripped through the camp of protesting chemists in front of the Punjab Assembly.

The Jamat-ul-Ahrar had claimed responsibility for the attack.