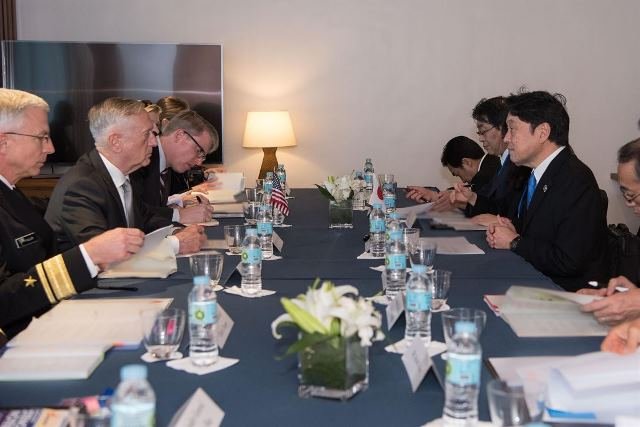 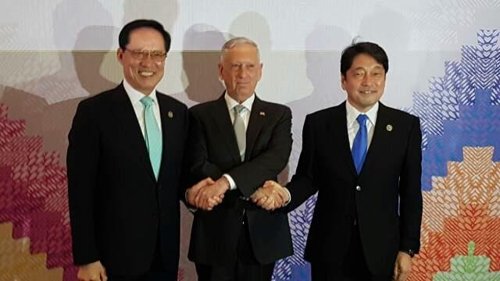 Secretary of Defense Jim Mattis met with Japanese Minister of Defense Itsunori Onodera in Clark, Philippines on the sidelines of the ASEAN Defense Ministerial Meeting Plus to discuss regional and global security issues.

Secretary Mattis and Minister Onodera reaffirmed the U.S.-Japan alliance is the cornerstone of peace, prosperity, and freedom in the Asia-Pacific region.

The defense leaders both condemned in the strongest terms North Korea’s recurring provocations and development of nuclear and ballistic missile capabilities, which pose an increasing threat to regional peace and security.  They resolved to continue bolstering bilateral and trilateral security cooperation with the Republic of Korea to deter and respond to threats posed by the Kim Jong Un regime.

Secretary Mattis reaffirmed that Article 5 of the U.S.-Japan Security Treaty applies to the Senkaku Islands and that the United States will continue to oppose any unilateral action that seeks to undermine Japan’s administration of these islands.

Both Secretary Mattis and Minister Onodera expressed serious concern about the situation in the South China Sea and reaffirmed their opposition to unilateral coercive actions by claimants, including the reclamation and militarization of disputed features, which alter the status quo and increase tensions.

Secretary Mattis and Minister Onodera confirmed that the United States and Japan will continue to cooperate closely to provide capacity building assistance to Southeast Asian partners.  They affirmed that the U.S.-Japan alliance is indivisible and agreed that further efforts to strengthen the alliance will contribute to peace and stability in the Asia-Pacific region and around the world.

In separate press release by Pentagon, the US Defense Ministry,  Jim Mattis met with Republic of Korea (ROK) Minister of National Defense Song Young-moo in Clark, Philippines on the sidelines of the ASEAN Defense Ministerial Meeting Plus to discuss regional and global security issues, including the threat posed by North Korea.

Secretary Mattis and Minister Song reaffirmed the U.S.-ROK alliance is the linchpin of peace and security in the Asia-Pacific region.

They agreed to continue discussions in Seoul at the 49th U.S.-ROK Security Consultative Committee, scheduled for October 28, 2017.