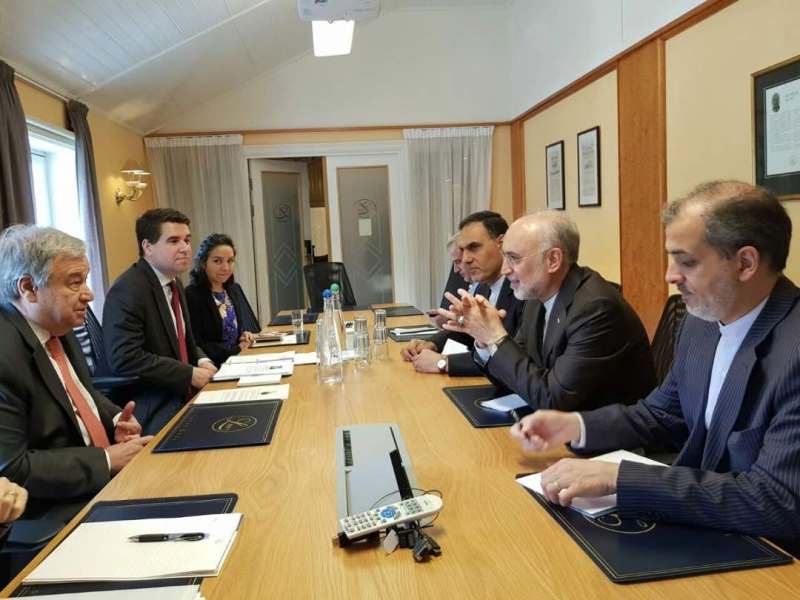 Antonio Guterres, United Nations Secretary General  said on Tuesday in a meeting with the Head of the Atomic Energy Organization of Iran (AEOI) Ali-Akbar Salehi that Iran nuclear deal also known as JCPOA plays an effective role in the international security.

Reiterating his explicit support to JCPOA, Guterres referred to his talks with the countries remaining in the deal, saying that the international deal plays an effective role in maintaining global security, particularly Non-Proliferation Treaty.

Salehi, for his part, described US recent policies regarding JCPOA as destructive, adding that EU’s proposals for meeting Iran’s expectations are not sufficient.

Given the dangerous situation facing the Middle East, he hailed Iran’s role in the region, saying that if the situation persists, all would be losers.

Salehi also maintained that US policy to counter Islamic Republic and return to the era of following up the country’s unconstructive policies are doomed to failure.

He also said that the outcome of the JCPOA is lower than what was expected, calling for clear support for the landmark deal by the UN and European states and withstanding Trump administration’s policies.

Guterres also said that Iran’s political and economic expectations from EU are understandable and that he will urge the remaining parties to JCPOA at the earliest to meet Iran’s expectations.

Salehi is currently in Norway at the head of a delegation to attend Oslo Forum.

The Oslo Forum is a series of retreats for international conflict mediators, high-level decision-makers, and other peace process actors. It provides a discreet and informal space to reflect on current mediation practice, collaborate across institutional and conceptual divides and advance negotiations. From a modest gathering of mediators in 2003, the Oslo Forum has grown to become the pre-eminent retreat in the field of international peacemaking.