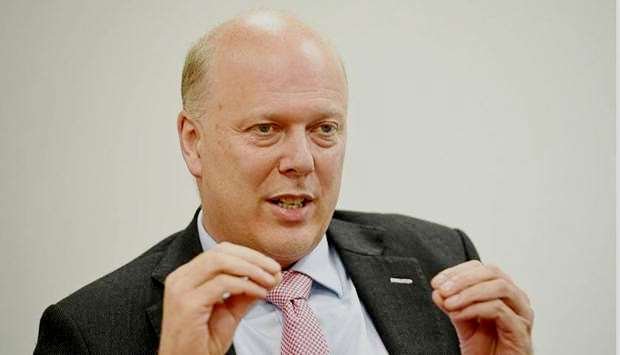 Chris Grayling, UK Secretary of State for Transport and Member of Parliament said today that Qatar is witnessing remarkable development towards building a fast-growing and accelerated economy.

The country is implementing an “ambitious development programme that has transformed Doha into a workshop for a variety of projects that will make it a strong economic centre in the region and the world”, he said in an interview with the official Qatar News Agency.

Replying on the on-going siege, British Minister said that he is impressed with the growth of the economy, however, it has been a challenging time for Qatar and UK wants to see a quick resolution to the dispute.

He told that he has held constructive meetings with Qatari officials during his visit to Doha and showed UK willingness of working closely on major projects including expansion of Hamad International Airport and other infrastructure projects. Chris Grayling said that such projects provide real opportunity to deepening bilateral ties between the two countries.

He said that both the countries have significant partnerships in a number of promising sectors. They also have multiple opportunities to create other areas of co-operation that will enhance the relationship between them,  ranging from economic co-operation to forging a strategic partnership that paves the way for deeper defence co-operation.

He noted that Qatar has ambitions for having huge private investment in infrastructure, which will open the door for promising co-operation opportunities and sharing of expertise to work together and help translate the ambitions to reality, especially in light of Doha’s preparations to host the 2022 FIFA World Cup.

Chris Grayling expressed readiness to work closely with Qatar to help the country deliver a magnificent World Cup, as Britain has had the recent experience of holding the Olympic Games as well as how to run these events smoothly.

Speaking on co-operation in the aviation sector, the UK Secretary of State for Transport said he has held talks  on developing and promoting cooperation in this field, he told that British investment has already been made in supporting the development of air traffic control in Qatar. The UK possesses advanced skills in air traffic control system that will help the Qatari administration develop its competence in that area.

The British Secretary praised the outcome of the Qatar-UK Business and Investment Forum, which was held in London recently, in providing promising opportunities and opening up new horizons for co-operation between the two sides, noting that Qatar Investment Authority is committed to investing £5 bn in the UK in the coming three years.

On a question whether British interests in Qatar had been affected by the on-going siege, Chris Grayling said that  he does not believe in that since UK and Qatar have close friendship and he will not like to see any change in relations due to the difficult circumstances rather we like to stand with friends in their tough times.

On a question in situation after Brexit, any UK’s interests in signing further trade agreements with Qatar, Grayling said the UK has ambitions to strengthen trade ties around the world and continue to be a good neighbour of the European Union (countries) and trade with them. Stating that the UK is the biggest export market, he said part of the opportunity for the UK after Brexit is to strengthen trade ties and open up new trading opportunities, whether it is on a sector-by-sector basis or in broad terms through wide-ranging trade agreements.
Above all, he added, the UK wants to be a much stronger investment and trading partner and seeks good friends and long-standing allies such as Qatar to deepen those trading relationships.

Replying to a question on possibility of co-operation in areas not yet discovered between the two countries, Chris Grayling indicated towards fast-emerging digital economy as a great creative economy, moreover, technological skills in the oil and gas sector which is relevant to Qatar.  He hoped that British energy firms may invest in future  when there is a whole range of sectors with opportunities for the relationship to deepen.