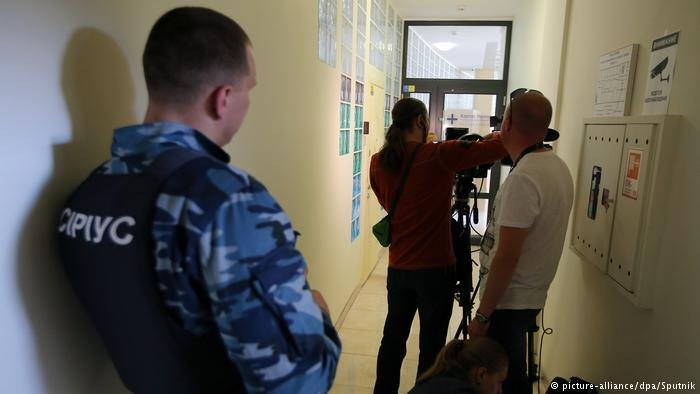 The SBU said the raids were part of its investigation into Russian media outlets being “used as tools of a hybrid war against Ukraine.”

Relations between Kiev and Moscow have been tense since Russia annexed Crimea from Ukraine in 2014 and supported Ukrainian separatists in the region.

The Kyiv government has long accused Russian state news agencies of stirring up conflict in the region. Ukraine has also accused Russia of supporting separatists with troops and sophisticated weaponry and launching cyber attacks on Ukrainian infrastructure, allegations Moscow has denied.

The raids and arrest took place after Russia opened a bridge connecting the southern Krasnodar region and the Crimean city of Kerch.

Kirill Vyshinski, the head of RIA Novosti’s Ukrainian office, was also detained at his house in Kiev for suspected treason, a crime which can carry up to 15 years in prison.

Vyshinski is a Ukrainian national who received a Russian passport in 2015 by presidential decree. He has been accused of traveling to Crimea in 2014 to do “subversive” reporting to justify the peninsula’s annexation and collaborating with separatist groups in eastern Ukraine.

Ukrainian authorities have previously detained or deported several journalists for spreading anti-Ukrainian propaganda and supporting the separatists’ cause. The SBU said he received ample funding to carry out his work in the region.

“Today we can say that he received €53,000 ($62,000) a month for such activities,” SBU deputy chief Viktor Kononenko said. “The money was subsequently distributed to the groups and people involved. That was the reason for the searches.”

Condemnation from the Kremlin

Russia angrily protested Tuesday’s raid and Vyshinski’s detention, with the Kremlin calling the actions “unacceptable” and accusing the Ukrainian government of repeatedly putting “pressure on freedom of speech.”

“If it is the case that the actions of Ukrainian law enforcement bodies are somehow connected with the professional work of these media organizations, that would be outrageous and scandalous,”  said Kremlin spokesman Dmitry Peskov.

“We will act aggressively and protect the interests of Russian media to the fullest extent.”