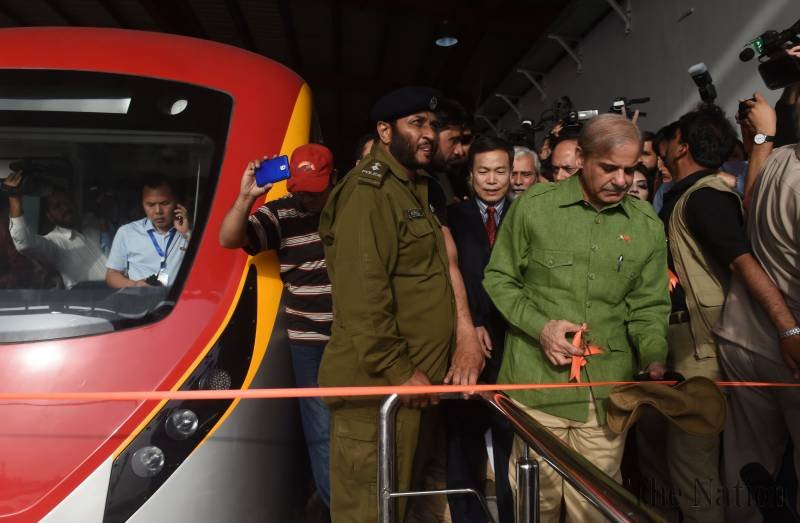 Chinese Consul General, ministers, parliamentarians, and a large number of people were present on the occasion. Talking on the occasion, Shahbaz Sharif said that orange line metro train in Lahore is a glowing and immortal example of Pakistan-China friendship.

Lahore has become the pioneering Metro Train City of Pakistan. Had PTI not created hurdles in this mega public welfare project, lakhs of people would have been using this metro train. This is the project of common man and has been much delayed due to PTI.

Orange line metro train (OLMT) has 26 stations. 24 stations are made at the height of 12 meters whereas two stations are constructed underground. The number of trains is 27 and each train has five bogies.

At the start of this project, tendering was done in spite of government-to-government agreement and Rs.69 billion were saved by Punjab government through post-bidding whereas around Rs.6 billion were also saved in local tendering in collaboration with the Chinese government.

Each train consists of five bogies and each bogie is 20 meters long with 60 seats. Separate seats are allocated for women, senior citizens and special persons. 200 passengers can travel in each bogie and public address system is also installed for the convenience of the passengers.

The doors of the electric train are fully automatic and doors are also installed at the platform to ensure double safety of the passengers.

Installation of electric accelerators is in full swing to help the needy to reach the platform easily. All the 27 train sets have been imported and 14 of them are placed at Dera Gujran while 13 are parked at stabling yard of Ali Town.

The second test run of Orange Line Metro Train in Lahore is being held today.

The Chief Minister Punjab Muhammad Shahbaz Sharif  on the occasion in his tweet message said the test run of Orange Line Metro Train is a milestone towards the completion of the project.