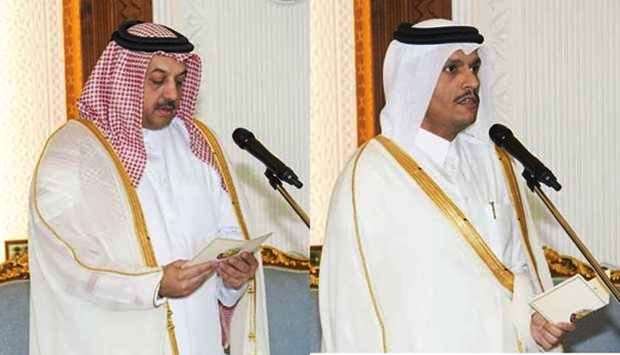 Emir of State of Qatar, Sheikh Tamim bin Hamad Al-Thani issued on Tuesday Emiri order No. 4 of 2017, appointing  Dr Khalid bin Mohamed Al-Attiyah, Minister of State for Defence Affairs  and Sheikh Mohamed bin Abdulrahman Al-Thani, Minister of Foreign Affairs as Deputies to the Prime Minister, in addition to their posts.
The Emiri Order is effective from the date of its issue and is to be published in the Official Gazette.
Dr Khalid bin Mohammed Al-Attiyah and Sheikh Mohamed bin Abdulrahman Al-Thani took the oath before His Highness the Emir at the Emiri Diwan on Tuesday morning.
Present on the occasion were Sheikh Abdullah bin Hamad Al-Thani, Deputy Emir of Qatar and Sheikh Abdullah bin Nasser bin Khalifa Al-Thani, Prime Minister and Interior Minister of State of Qatar .
November 14, 2017 / Current Affairs