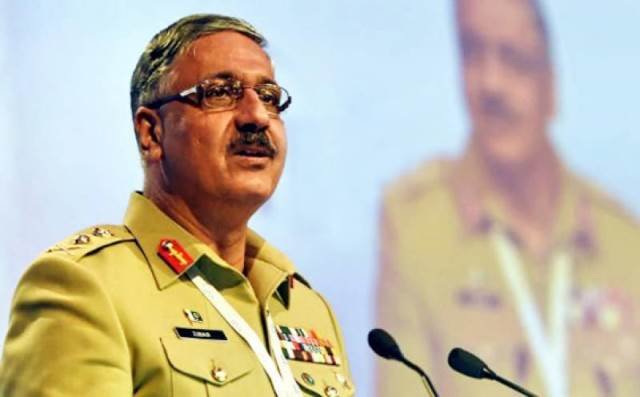 Indian intelligence agency RAW has established special cell at a cost of $500 m dollars to sabotage  C-PEC. Pakistan is not oblivious to its defense.

Gen. Hayat said Kashmir issues still remains a flash point for a nuclear war between Pakistan and India. He said that  path to relations between Islamabad and New Delhi passes through Kashmir. “There is no bypass,” said he.

Criticizing India’s international ambitions, the general said New Delhi policies are becoming a cause of instability in South Asia.

He stressed the need to take into consideration strategic, economic and political affairs of  South Asia.

He said the political and strategic  issues in South Asia were intensifying disputes in the region, adding Pakistan would maintain  strategic balance and equilibrium in the field of conventional weapons because imbalance always gives birth to disputes.

He said the struggle to become guaranteer of peace in the region holds strategic significance.

Commenting on the situation in Afghanistan, he said the war stricken country was an important region between South Asia and Central Asia. He said Islamabad supports a peaceful Afghanistan.

He said South Asia is being destabilized through non-state elements whole and instability in Afghanistan was harmful for the region .

Pointing towards weak  governance  in Afghanistan and fragile peace process in the country, he said Pakistan was paying a heavy price for instability in Afghanistan.

Highlighting Kashmir issue, he said lasting peace was not possible in South Asia without resolving the issue of Kashmir. “Pakistan wants resolution of Kashmir and Afghan issues. We want similar progress on all the issues”.

He said Pakistan was aware of its responsibilities without ignoring its defence. “Pakistan will maintain minimum nuclear capability considering  the circumstances”.

He said India continues its sub conventional war against Pakistan and New Delhi’s Surgical strike mantra  was an important example in this regard.

The Chairman Joint Chiefs of Staff Committee said India has committed over 1200 ceasefire violations in which 1000 Pakistani civilians and 300 soldiers lost their lives. “This Indian behavior can turn into a big war,” he warned.

He also accused India of carrying out terror activities in Pakistan through Tehreek-e-Taliban Pakistan and Baloch separatists.  He said Indian conspiracies against CPEC were also no secret , adding that New Delhi has allocated 500 million dollars to sabotage  the CPEC.

He said India was rapidly increasing its missile defence technology, nuclear weapons and conventional weapons.  He said India is also diverting Pakistan’s share of its waters. “India is playing with fire and peace of South Asia,” Geo News quoted him as saying.