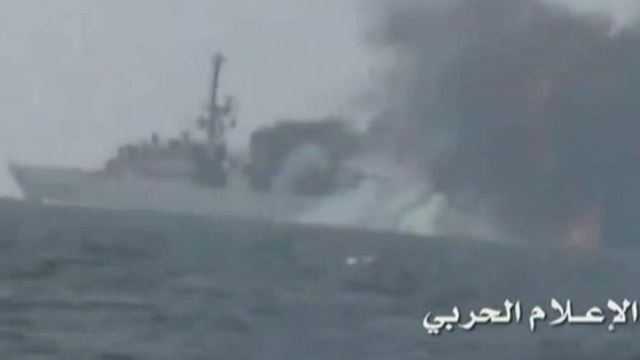 The official Saudi Press Agency (SPA) reported that the Saudi-led coalition, which is trying to reinstall Yemen’s ousted government, had released a statement saying that a Saudi frigate had been attacked by three suicide boats operated by the Ansar Allah (Houthi) group west of the Yemeni port of Al-Hudaydah.

Ansar Allah, which is supported by Iran and allied with Yemeni military units loyal to former president Abdullah Ali Saleh, is not known to have previously used suicide bombing tactics.

The SPA reported the coalition statement as saying the Saudi frigate “dealt with the boats as necessary”, but one collided with the rear of the vessel and exploded, causing a fire. Two members of the frigate’s crew were killed and three injured.

It said that the fire was extinguished, the frigate continued with its patrol, and coalition aircraft were pursuing the fleeing attack boats.

Pro-rebel media channels reported that Yemen’s naval forces had launched a missile that hit a Saudi Al-Madinah-class frigate off Yemen’s western coast. They claimed the frigate was violating Yemen’s sovereignty and had been involved in attacks on civilians.

The rebels have previously claimed to have carried out anti-ship missile attacks, including one that hit the United Arab Emirates’ high-speed logistics vessel Swift off Yemen’s Red Sea coast on 1 October 2016.

They denied responsibility for a series of missile launches that the United States said were detected by the destroyer USS Mason between 9 and 15 October.

THE Pentagon believes Yemeni rebel “suicide” boats which attacked a Saudi warship on patrol in the Red Sea were actually trying to target the US as per some Pentagon officials are quoted in various media circles. US Navy destroyer USS Cole was attacked in 2000 at Port of Aden while fueling.

Qatar has strongly condemned attack on Saudi Naval ship and expressed its full support and solidarity with the Kingdom of Saudi Arabia in its efforts and actions taken to maintain security and stability, a press release issued by Qatar Ministry of Foreign Affairs according to Qatar News Agency.