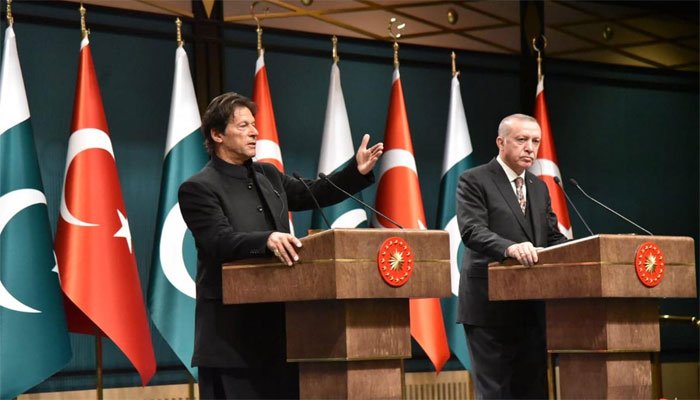 Having exchanged views on the entire spectrum of Turkey – Pakistan bilateral “heart-to-heart” relationship as well as on issues of regional and international importance, the leaders of the two countries:

Re-affirmed that the unparalleled fraternal relations between the peoples and the governments of the two countries date back centuries and are embedded in a common cultural and religious heritage, as well as a shared vision for the future, based on complete mutual understanding and trust;

Noted with great satisfaction that the relationship between the two brotherly countries has over the years transformed into a strong strategic partnership in all areas of mutual interest, that has withstood the tests of time;

Reiterated their determination to continue extending strong mutual support to one another on all issues of core national interest;

Expressed their commitment to further enhance their bilateral relations in every field to the benefit of their peoples;

Noted with satisfaction their ever-expanding defense and defense industry cooperation;

Expressed their resolve to further strengthening the existing economic, trade and commercial relations between the two countries;

Agreed to initiate mechanisms for collaboration in health and agriculture sectors;

Underlined their abiding commitment fighting the menace of terrorism in all its forms and manifestations;

Reiterated their resolve to fight against the Fethullah Gulen Terrorist Organization;

Expressed satisfaction at the ongoing cooperation between the two countries at the multilateral forums including at the United Nations, Organization of Islamic Cooperation; Economic Cooperation Organization; Developing 8 Countries; as well as other relevant forums;

Reaffirmed their commitment for achieving and sustaining peace, security and stability in their respective regions as well as internationally;

Underscored the need for resolution of the issue of Jammu and Kashmir through a sustained dialogue process and in accordance with the relevant UN Security Council resolutions;

Recognized the Turkish support for Pakistan’s membership in the Nuclear Suppliers’ Group (NSG) based on non-discriminatory criteria, and reaffirmed that Pakistan’s adherence to the NSG Guidelines and participation in the NSG would strengthen the global non-proliferation objectives;

Acknowledged that sustainable peace and stability in Afghanistan could be achieved through reconciliation of all segments of the Afghan society with support of the regional countries and the international community;

Reiterated their full and resolute support to the efforts for the comprehensive settlement of the Cyprus issue on the basis of the political equality of the two communities on the Island, with a view to building peace and stability in the Eastern Mediterranean;

Emphasized the centrality of the cause of Palestine, rejected any attempt to alter the legal status and historical character of Al Quds; called on the international community to increase their support to the Palestinian people in realizing their quest for the establishment of an independent, sovereign and contiguous State of Palestine on the basis of the borders of 1967 with Al-Quds Al-Sharif as its capital;

Agreed to increase collaboration to uphold the true values of Islam at the international forums as well as to work closely against any attempts to malign, distort or vilify the historical image of Islam, its revered personalities, and its fundamental beliefs;

Expressed their strong resolve to further increase the frequency of bilateral contacts at the highest level;

Reiterated their determination to continue taking steps in all areas of mutual interest for mutual peace and prosperity, especially by transforming the historic Turkey-Pakistan relationship into an increasingly stronger trade, investment and economic relationship for the benefit of the peoples of the two countries; and agreed to convene the 6th Session of the Turkey-Pakistan High Level Strategic Cooperation Council in Pakistan at mutually convenient dates for further discussion on these areas.

20 January 2022 By Ashraf Siddiqui More than 7,000 books of different ...
END_OF_DOCUMENT_TOKEN_TO_BE_REPLACED