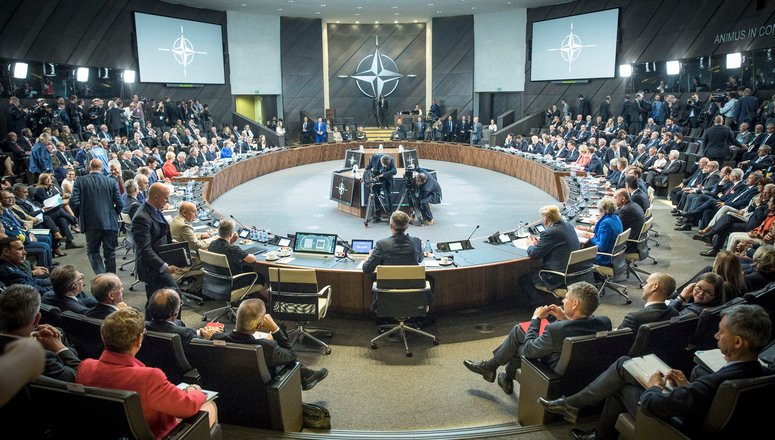 Turkish Foreign Minister Mevlut Cavusoglu and Deputy Secretary General of the North Atlantic Treaty Organization (NATO) Rose Gottemoeller stressed that Qatar is an ally and an active party in NATO, as well as an important part of the Alliance’s future, which faces great challenges at the current time, especially with the growing phenomenon of terrorism around the world.

They praised the participation of the State of Qatar in the 29th NATO summit currently held in the Belgian capital Brussels.

In an interview with the Qatari Al-Sharq newspaper issued Thursday, the Turkish Foreign Minister said that the State of Qatar is an important political and military ally and a balanced party in the equation of the international forces in confronting extremism, terrorism and tensions in the world.

He hailed Doha’s participation in the 29th NATO Summit as a practical translation of the appreciation of Alliance’s Member States for the role played by Qatar over the past years and its effective involvement in countering terrorism on more than one front.

He added that Qatar’s joining to the Alliance by its forces and equipment in Afghanistan, the most important battlefronts against terrorism in the world, to confront terrorist organizations and restore security, stability and cohesion to the State of Afghanistan and Southwest Asia in general, is an important and pivotal role on the agenda of the current Summit with the participation of NATO’s leaders.

The Turkish Foreign Minister stressed that the State of Qatar’s armed forces have significant military expertise acquired through their participation and involvement in extensive and important training programs with various forces around the world within joint training exercises which the Qatari leadership is keen to sign treaties and agreements on them, pointing out that these programs earned Qatari forces outstanding skills and innovative defensive and offensive plans, especially in rugged geographical regions of Asia.

The Minister added that these backgrounds made NATO Member States welcome Qatar’s role in the alliance and its participation in the most important and active fronts where terrorist groups are operating, namely Afghanistan, in addition to restoring the security, safety and cohesion to the State of Iraq, which recently declared victory over terrorist organizations, and many other fronts in various regions around the world.

He also underlined that Qatar is an important State in the Gulf region, and for its political and geographical importance, it hosts the largest military bases in the world, exchanges experiences with greatest armies and joins them in military exercises.

Turkish Foreign Minister Mevlut Cavusoglu noted that the current NATO Summit is an important occasion to highlight the role played by Qatar in the past years in combating terrorism, participating in the achievement of security and confronting threats in the world, and to celebrate this role in front of the world and the Member States. It is also an occasion to draw a map for the movements of the forces and the challenges they may face in the future, especially with the significant participation of the State of Qatar militarily and financially in the most important battlefronts against extremist organizations in the world (Afghanistan).

For her part, the Deputy Secretary General of NATO Rose Gottemoeller stressed that Qatar is an ally and an active actor in NATO, as well as an important part of the Alliance’s future which faces great challenges at the current time, especially with the growing phenomenon of terrorism around the world.

In an interview with Al-Sharq newspaper, Gottemoeller referred to the State of Qatar’s participation for the first time mainly in the work of the 29th NATO Summit, which began on Wednesday in the Belgian capital Brussels, and will last for two days, along with 29 Member States and 20 partner countries, as well as representatives from the United Nations, the European Union, the World Bank and the NATO Parliamentary Assembly, to participate in improving the NATO’s future and discuss the path of the most important international military alliance in the world, especially with the increasing threats and tensions and the expansion of terrorist organizations in the world.

NATO’s members welcomed the presence of the State of Qatar and its active involvement in the Alliance because of its honourable record in the fight against terrorism, she added.

Gottemoeller explained that the current NATO Summit is held to discuss the defense and economic affairs and ways to provide finance and support to the Alliance by all means, especially the political and the military support.

The Summit, she added, will also review the importance of Qatar’s joining the Alliance because of its regional weight and its important geographical position, which will provide important support to the countries of the region, as well as its participation in the development of the policies of deterrence, defense and support for security and stability, and the mechanism of sharing the financial burden among the member states of the Alliance, in addition to Qatar’s involvement in the most important front of the US-led counterterrorism in Afghanistan.

She said that during the Summit, the Alliance leaders will also discuss steps of the deployment of NATO-led forces in Southwest Asia, called ‘Resolute Support’ mission, adding that Qatar is an important and strong member in the support of the mission.

NATO Deputy Secretary General said that this Summit came at a time when the world is suffering from unprecedented turmoil, powers are changing, emerging and reactionary powers are fluctuating, modern technology poses additional challenges and the West suffers from stormy domestic policies and troubling conflicts, adding that mass migration is also a concern for everyone, and that the countries of the Middle East and North Africa are suffering from conflicts and disturbances that threaten the world. She also stressed that these issues will be discussed seriously during the Summit in order to reach effective solutions and practical mechanisms to dismantle all these entanglements and confront global threats by strengthening NATO’s defense force, intensifying counterterrorism efforts and achieving more equitable burden sharing.

On March 7, the State of Qatar and the North Atlantic Treaty Organization (NATO) signed an agreement on cooperation in military and security matters. On May 3, Qatar presented to NATO a document of individual partnership and cooperation programme between Qatar and NATO, approved by Qatar.