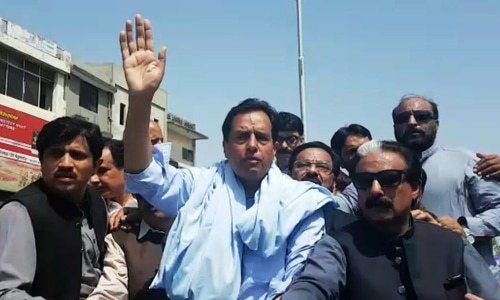 In a letter authored by Senator Mushahid Hussain Syed, chairman of the party’s Central Media Committee, the party complained that over 200 of its workers were arrested from Rawalpindi on Tuesday after frivolous cases against PML-N leaders and workers were registered.

Rawalpindi Police spokesperson Imran Kazmi had earlier confirmed that around 100 PML-N workers were arrested for participating in the rally which culminated in the arrest of retired Captain Safdar, as it had blocked a road and flouted other rules in the Election Commission of Pakistan’s (ECP) Code of Conduct.

The police had registered four cases against PML-N workers for their participation in the rally.

Around 26 other workers of the party were arrested yesterday for attending a breakfast hosted by a PML-N candidate, for which a road had been blocked.

A total of 105 workers were presented in different courts today as police sought judicial remand; 37 were granted bail, while PML-N leaders Abbasi and Zaibun Nisa were granted pre-arrest bail.

The letter authored by Senator Syed termed the imposition of Section 144 in Lahore a “draconian” measure which is “contrary to the spirit of democracy and free and fair elections”.

The party sought a redressing of these measures, warning the chief minister that it would otherwise presume that the caretaker setup is complicit in pre-poll rigging.

Hanif Abbasi, also a party candidate from Rawalpindi, further complained that the administration was favouring his opponent Sheikh Rashid as he is losing on both National Assembly seats he is contesting on.