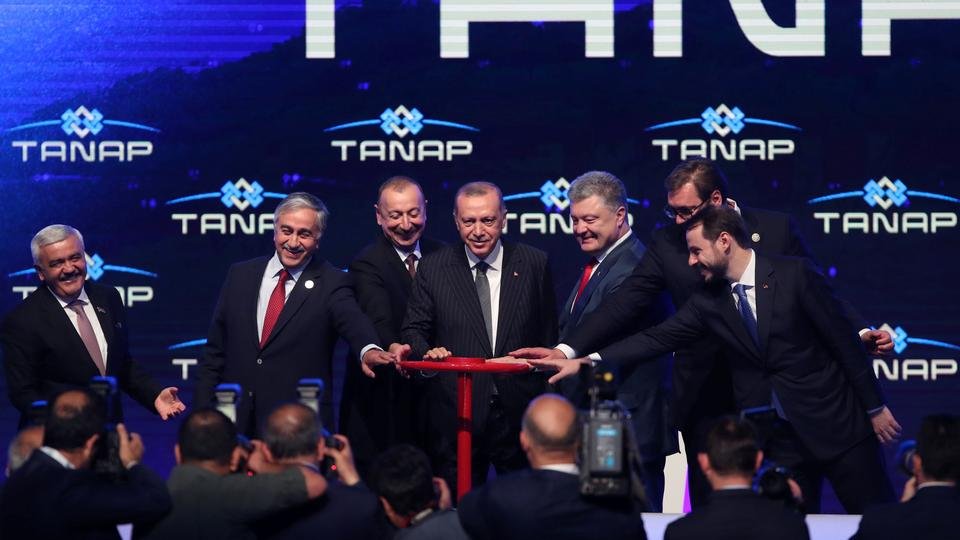 Turkey along with other partner countries launched on Tuesday the historic Trans-Anatolian Natural Gas Pipeline (TANAP) project in the central Turkish city of Eskisehir.

Speaking at the ceremony, Erdogan called TANAP the fruit of the shared vision of the countries involved in the project and said it would pave the way for similar future projects.

“The political and economic stability ensured over the last 16 years in Turkey has played a very significant role in realising TANAP in such a short time,” Erdogan said, referring to the era governed by the Justice and Development (AK) Party.

Calling it a historic step for the countries of the region, he added, “We are opening the Trans Anatolian Natural Gas Pipeline, the backbone of the southern gas corridor, which we call the Silk Road of energy.”

Erdogan said the project was made possible primarily due to good Turkish-Azeri relations, based on mutual trust. He added that the harmonisation and understanding among producer, transit, consumer countries, and companies also sped up the process.

Noting TANAP’s starting capacity of 16 billion cubic metres (bcm) of natural gas, he said 6 billion of that will go to Turkey and the rest to Europe.

Erdogan said the first gas delivery to the Greek border is set for June 2019.

“We have sent our first local and national drilling ship, the Fatih, to the Mediterranean. With this ship and its cutting-edge technology, we have addressed an important shortcoming of our country,” Erdogan said, adding that they have boosted Turkey’s renewable energy resources’ installed power from 12,305 megawatts to 40,838 megawatts.

The 1,850-km pipeline is the largest section of the 3,500-km Southern Gas Corridor, which was inaugurated on May 29 in Baku.

The European part of the project is expected to be operational in 2020.

The TANAP project has seen the employment of around 13,000 people.

The estimated investment cost was $11.7 billion at the start of the project, but this figure has been revised down to $7.99 billion.

TANAP will be followed by an 878-km cross-border natural gas pipeline, the Trans-Adriatic Pipeline (TAP).

TAP is currently under construction, stretching from the Greek-Turkish border crossing Greece, Albania and the Adriatic Sea to Italy. At its entry point, TAP will connect to TANAP in Turkey.