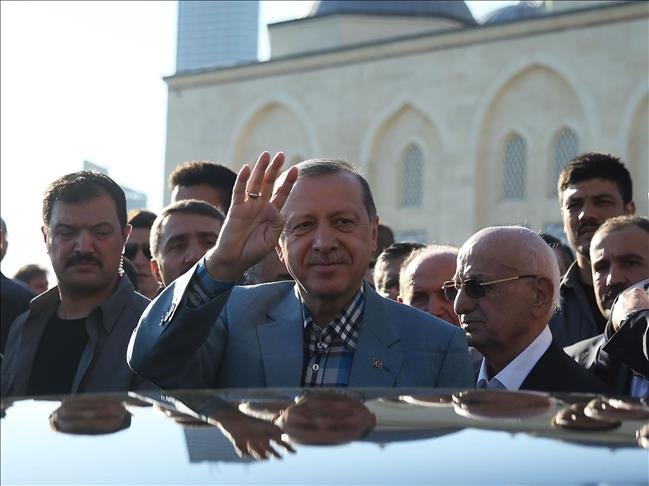 He said Turkey can “appreciate and embrace’ Qatar’s stance against the 13-article demand by Saudi Arabia the United Arab Emirates, Bahrain and Egypt.

“We consider these demands are against international law,” Erdogan told journalists after Eid al-Fitr prayers in Istanbul. “It is a breach of Qatar’s sovereignty rights.”

Qatar said early Saturday it received the list of demands to be met to end a blockade against the Gulf state but they were “not reasonable” and “actionable”.

The demands include the closure of Al Jazeera television network, downgrading ties with Iran and extraditing “terrorists”, according to reports.

The four countries have given Doha a 10-day deadline to meet the demands.

Erdogan also rejected a demand from Arab states to shut down its military base in Qatar, saying demanding Turkey’s military withdrawal is also “a disrespect” towards the country.

“Should we get permission when we make a defense cooperation agreement with any country? No offense but Turkey is not such an ordinary country [that will ask for permission],” Turkish President said.

On June 23, Turkish Defense Minister Fikri Isik had told a local broadcaster that the base in Qatar supporting the security and stability of Gulf countries, and any call to shut the base acts as interference in Turkey’s ties with Qatar.

Earlier in June, Turkey’s parliament voted to deploy more troops to the base and approved the training of Qatari forces by Turkish gendarmeries following the cutting of ties with Qatar by Saudi Arabia, the United Arab Emirates, Bahrain, Egypt and Yemen.

The five Arab countries accused it of supporting terrorism.

Doha, for its part, strenuously denies accusations that it supports terrorism, describing the attempts to isolate it as “unjustified”.