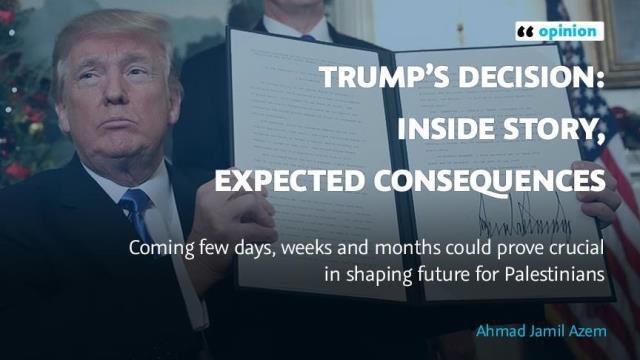 U.S. President Donald Trump, through his announcement last Wednesday, recognized Jerusalem as the capital of Israel. The road to this decision can be better understood by mapping the team that works with Trump on Middle Eastern issues, and by understanding the president’s financial and electoral network.

On the other hand, the consequences of the decision should be traced through two dimensions; its meaning for the Israeli-Palestinian conflict and the American vision for the world order.

As early as January 2016, Trump answered a question about the relocation of the U.S. embassy from Tel Aviv to Jerusalem. “They want it in Jerusalem,” he said and added, “Well, I am for that 100 percent. We are for that 100 percent.” He was referring to groups, such as the Republican Jewish Coalition, and Evangelical Christians.

Both have a strong voting base and considerable financial weight. Trump’s biggest donor is the casino magnate Sheldon Adelson, who donated $25 million to the presidential campaign and paid further $5 million to support his inauguration. It is revealed that Adelson expressed anger when Trump signed, in June 2017, the waiver to keep the embassy in Tel Aviv.

This signing of this waiver has been a routine for American presidents since 1995 when the American Congress passed legislation for the purpose of relocating the American embassy to Jerusalem.

The head of the Palestinian delegation in Washington, Hosam Zomlot, told CNN that the recognition decision came as a surprise. “I felt it was a sudden stab in the back because we were going in the direction of the ultimate deal,” he remarked. This sudden decision of implementing the 1995 legislation can perhaps be explained by the pressure of people like Adelson.

The relationship between Adelson and Trump, however, is not confined to supporting Israel. A few days earlier, Adelson and Trump gained a victory that will save them — along with a number of other people — billions of dollars.

Another partner in the tax campaign is another billionaire, Trump’s son-in-law Jared Kushner, who was tasked with following up the peace process between the Palestinians and the Israelis. According to CNN, Kushner and his wife have been active in recent weeks with regard to the tax plan. Interestingly enough, Kushner began running his family’s multibillion-dollar business in 2008 when his father was sent to prison for illegal election campaign contributions, tax evasion, and witness tampering.

Originally a Jew from the Ukraine, Adelson financed Trump’s presidential campaign with specific goals in mind, such as changing the tax laws and having Jerusalem recognized as Israel’s capital. Kushner is known as a Zionist Jew making donations for and actively supporting the building of Israeli settlements in the Palestinian occupied territories. He has personal and family connections with the Israeli Prime Minister Benjamin Netanyahu.

There are two other major players in Trump’s team with relatively similar qualifications, two lawyers, specialists in finance and taxation. The first is Jason Greenblatt. He was previously the legal officer in Trump’s financial and investment organization, and now he was appointed by the president as his special representative for international negotiations. He also collaborates with Kushner on the Palestinian-Israeli file. An Orthodox Jew, he himself lived in Israeli settlements, where he studied and volunteered as an armed guard.

The other interesting member of the team is a hardliner Zionist lawyer, a specialist in bankruptcy cases, who is now the U.S. ambassador to Israel: David Friedman.

The kind of network and team surrounding Trump help explain that Jerusalem was part of a larger agenda, where financial interests, religious issues, elections, and politics got all mixed up. But it is important to note that the decision on Jerusalem is merely overshadowing the new tax policies.

Evaluating Trump’s decision by not considering his disrespect for international law and institutions would be highly incomplete. He promised during his electoral campaign to withdraw from international organizations and agreements that do not serve the immediate interests of the U.S.

He has pulled out of the Paris climate-change accord, demanding renegotiation agreements including the North American Free Trade Agreement (NAFTA). Upon such vision, it became possible for Trump to ignore international resolutions adopted by the United Nations on Jerusalem and to abandon the official U.S. policies and positions that deny Israel the right to implement unilateral policies in the city.

The decision of Trump is another indication how this current administration is committed to weakening the institutional and liberal world order.

Words of advice from a number of aides, such as Secretary of State Rex Tillerson and Trump’s Arab allies may have played a role in softening the wording of his recognition speech. Tillerson said, “After this announcement, nothing is different, other than the president has now implemented the 1995 law”.

However, the actual thinking of the U.S. administration was boldly revealed by U.S. Vice President Mike Pence a few days prior to Trump’s announcement. During a ceremony commemorating the 70th anniversary of the UN vote on Resolution 181, which endorsed the establishment of the Israeli state, he resorted to direct religious discourse. He said, “the Jewish State of Israel was born, answering the ancient question first asked by the Prophet Isaiah: ‘Can a country be born in one day, can a nation be born in a moment?’.” Pence added, that “while Israel was built by human hands, it’s impossible not to see the hand of heaven”.

He referred to his planned visit to Palestine, saying “on my visit, it will be my great honor (…), to walk on the hallowed ground of that holy city that King David built more than 3,000 years ago… … as we speak, President Donald Trump is actively considering when and how to move the American embassy in Israel from Tel Aviv to Jerusalem”. Such discourse will clearly fuel the escalation of religious fundamentalism around the globe.

The announcement of Trump created a moment of shock in the Middle East. Streets in Palestine and other cities in the region are seeing protests that have not been witnessed in recent years, over one common cause. The response of politicians, especially among Palestinians, is being carefully watched by the younger generation.

The coming few days, weeks and months could prove crucial in shaping the near future for Palestinians, and how the young generation will view the current political leadership and organizations. If no convincing response comes, it is likely that a new wave of political movements will emerge.

[ The writer is Associate Professor at the Political Science Department of Birzeit University, Palestine ]