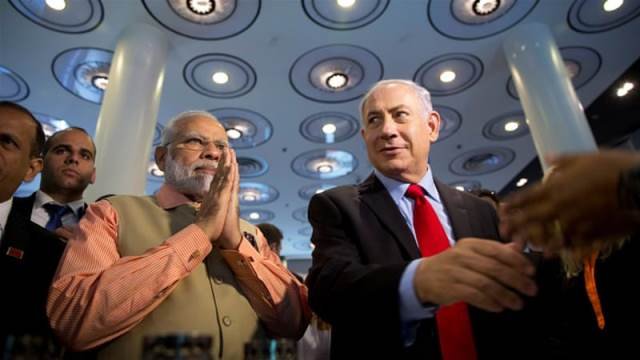 India’s two-sentence response to the US recognition of Jerusalem as Israel’s capital last week elicited mixed reactions after New Delhi for decades strongly backed the Palestinian cause.

The static statement to a dynamic situation was described by some as muted, others as pragmatic, and still others alleging it imbibes the anti-Muslim right-wing consensus of the ruling Bharatiya Janata Party (BJP).

“India’s position on Palestine is independent and consistent. It is shaped by our views and interests, and not determined by any third country,” Raveesh Kumar, spokesman of India’s Ministry of External Affairs, said last Thursday.

But critics say this was deliberately vague and India should have posited a more vigorous reaction, considering the serious and retrograde effect of US President Donald Trump’s Jerusalem announcement.

“A more robust response would be to state India’s position upfront. In any case, it would call for a two-state solution with East Jerusalem as the capital of a Palestinian state,” Manoj Joshi, senior analyst at the Observer Research Foundation, told Al Jazeera.

In previous decades – with the centrist Congress Party in power – solidarity with Palestine was an integral part of India’s foreign policy.

“It is not surprising that India will now not say anything against Israel as there is a very close bond being built between the two. The current Indian government’s closeness to Israel is also owing to the very clear Islamophobia of both the regimes. That’s very obvious. It’s a coming together of Islamophobic regimes,” Menon told Al Jazeera.

“India has always expressed solidarity with Palestine. India has always opposed Israel’s occupation of Palestine. There has been a long history of that. The democratic people of India still support Palestine, but the Indian state has clearly marked a shift,” she added.

The ruling BJP has fought most national and local elections on a Hindu nationalist agenda, with many party members accused of making anti-Muslim statements to polarise Hindu voters.

BJP legislator Subramaniam Swamy has also called on India to shift its embassy in Israel to Jerusalem like Trump pledged to do.

India-Israel ties have flourished since a ground-breaking trip by Indian Prime Minister Narendra Modi in July this year. Modi’s predecessors had kept Israel at arm’s length with New Delhi being a vocal supporter of the Palestinians.

Modi, however, has spoken of his personal affinity for Israel and his visit to the country before he became prime minister. He pointedly missed visiting Ramallah this year, the seat of the Palestine Authority and a customary stop for visiting leaders trying to maintain a balance in political ties.

But Sreeram Chaulia, dean at the Jindal School of International Affairs, said India’s evolving ties with Israel are based on pragmatism.

“I don’t think the fact that we are increasing our strategic cooperation with Israel should in any way come at the expense of the Palestinians. Our cooperation is based on pragmatic mutual benefit,” Chaulia told Al Jazeera.

“We are independent, not influenced by outsiders. Similarly on this issue, we have an embassy of Palestine in Delhi. India is a major contributor to the Palestinian Authority and its institutions … If India was a major political player in the Middle East, we would have been forced to take a stand, but we are not.”

Economist Prabhat Patnaik said the decolonisation of Palestine is a precondition for world peace and in India’s interest.

However, the “Hindu right, which currently rules the country”, wants to get closer to the US-Israel axis because of its “ideological affinity … of a shared anti-Muslim attitude”, Patnaik said.

India’s stated position on East Jerusalem as the Palestinian capital has remained a part of official statements.

On Monday, the foreign ministers of Russia, China, and India said in a joint statement in New Delhi that they continue to back an end to the Israeli-Palestinian conflict through various UN resolutions and the Arab Peace Initiative among initiatives.

But India’s relative silence after Trump’s radical decision on Jerusalem could well mark a point of departure in the country’s moral support for the Palestinian cause.

Professor Menon said India’s solidarity with the Palestinians will for now have to be borne by ordinary citizens.

“It will have to be non-state, people-to-people contacts for India-Palestine solidarity now. I don’t see how any ethical stance can condone Israel’s occupation of Palestine. There is no ethical argument that can justify the occupation,” Menon said.