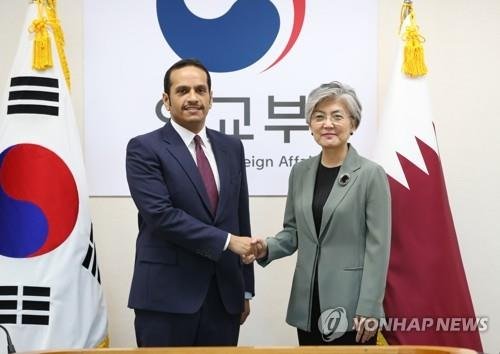 The top diplomats of South Korea and Qatar held talks in Seoul on Friday to strengthen cooperation over a range of bilateral and regional issues, including security on the Korean Peninsula.

During the meeting, Seoul’s Foreign Minister Kang Kyung-wha expressed hopes that the two countries can further cement the cooperative partnership on the occasion of the visit by her counterpart, Mohammed bin Abdulrahman bin Jassim Al Thani.

“Korea and Qatar have established a long standing relationship that has been very beneficial to both sides. Certainly, your visit this time will further that relationship,” she said during her opening remarks.

The Qatari minister, who also doubles as deputy prime minister, described the bilateral relationship as “very positive and constructive,” and expressed expectations that the two sides can further expand their areas of cooperation.

“We have a lot of areas that we are cooperating, especially in the areas of energy and industry, but also we are looking forward to further expand this cooperation between our two nations,” he said.

“I would like to congratulate (you on) the achievement you have accomplished with North Korea, and we hope that this would contribute to the stability of the Korean Peninsula,” he said.

“And anything that Qatar can help and support for further stability in the peninsula … Qatar is more than open,” he added.

At the talks, Kang expressed hope for Qatar’s successful hosting of the 2022 World Cup, noting that Seoul can cooperate based on its experience of hosting the international sporting event in 2002.

She also called for Qatar’s support for South Korean firms hoping to join the Middle East country’s project to introduce 3,250 buses fueled by compressed natural gas (CNG) and install seven CNG stations so as to prepare for an environmentally friendly World Cup.

In addition, she took note of Qatar’s continued support for Seoul’s policy toward North Korea.

In response, the Qatari minister said his country will continue to back international efforts for complete denuclearization and a lasting peace regime on the peninsula, the ministry said.