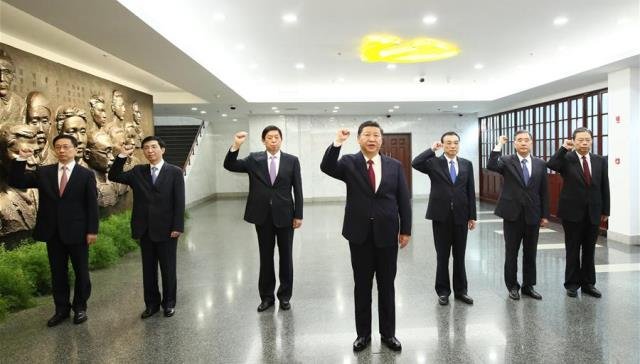 In July 1921, 13 individuals met and founded the Communist Party of China (CPC) in a brick-and-wood building in the French concession area of Shanghai.

Ninety-six years later, the new CPC leadership looked back on the Party’s revolutionary past to seek impetus for future endeavors.

Xi said the aim of the tour was to revisit the Party’s past — especially the history of its founding — to learn from the predecessors of revolutionary times and their noble spirit.

The tour should also serve to throw light on the responsibility the current leadership now bears, and strengthen their sense of duty to fulfill targets and missions laid down at the 19th CPC National Congress, he said.

“Only by remaining true to our original aspiration, keeping our mission firmly in mind, and keeping on striving, could the Party stay young and live,” said Xi, also Chinese president and chairman of the Central Military Commission.

“As long as the Party and all Chinese people unite and work hard, the great ship of national rejuvenation of the Chinese nation will reach its glorious destination,” he said.

The first stop of the Tuesday visit was Shanghai.

In 1921, the delegates representing about 50 CPC members nationwide convened the first CPC National Congress in late July in Shanghai, but moved to a boat on Nanhu Lake in Jiaxing of east China’s Zhejiang Province due to the harassment of local police.

The meeting site on Xingye Road has been open to public as a museum since 1952.

Xi visited the place three times when he worked in Shanghai.

After visiting a meeting room of the first CPC National Congress, Xi asked for efforts to protect and make good use of the site.

Once called by late Chinese leader Mao Zedong the “maternity ward of the CPC,” the site is also the “spiritual home” of Chinese communists, Xi said.

They also visited exhibitions displaying the founding and development of the CPC.

“We can not forget the road that we have taken no matter how far we march,” Xi said.

“We should often recall and deeply comprehend the cultural relics and scenes on the founding of the CPC so as to decode the CPC’s original aspiration,” he said.

Xi also led Li Keqiang, Li Zhanshu, Wang Yang, Wang Huning, Zhao Leji and Han Zheng to review the oath of the CPC in front of a huge CPC flag, then asked all CPC members to keep firmly in mind the oath and keep in alignment.

On Tuesday afternoon, the CPC leadership visited Jiaxing, following the footsteps of their forerunners.

The leaders visited a replica of the boat on which CPC founders convened their meeting in 1921 — now referred to as the “Red Boat” — and the Nanhu Lake Revolution Museum after a train trip from Shanghai.

The construction of the museum started on June 28, 2006, when Xi laid its cornerstone as then Zhejiang Party chief. However, Tuesday’s visit was Xi’s first visit to the museum since it opened in 2011.

Xi called on CPC members to implement the Red Boat spirit in the new era, which highlights pioneering work, persistence and dedication.

In an address at the end of Tuesday’s tour, Xi called the Shanghai and Jiaxing sites “the places where the CPC’s dream set sail” and “the root of the Party.”

“Our Party was born here, our journey began here, and our rule of the country all dates back to here,” Xi said.

Over the past 96 years, the CPC had united and led the Chinese people to make great achievements, but that undertaking has no end, Xi said.

“The original aspiration of the CPC members must never change,” he said, adding that only in this way could the Party keep on striving and win the hearts of the people.

Noting that the 19th CPC National Congress had outlined targets and missions for the development of the Party and the country, Xi said all CPC members must observe the Party’s fundamental purpose of wholeheartedly serving the people and working to improve the lives of the people.

They must keep in mind the noble ideal of Communism and the shared ideal of socialism with Chinese characteristics, remain humble and prudent, and brave hardships and sacrifices, in order to realize the two Centenary Goals and the great rejuvenation of the Chinese nation, Xi said.