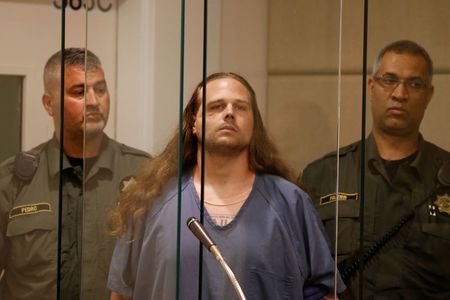 President Donald Trump has released his first official statement on the attack in Portland, Oregon, more than 48 hours after the two victims died.

“The violent attacks in Portland on Friday are unacceptable,” Mr Trump tweeted. “The victims were standing up to hate and intolerance. Our prayers are w/ them.”

Three days earlier, an Oregon man was accused of fatally stabbing two men and injuring one on a Portland commuter train. The victims died attempting to stop the man from screaming hate speech at two women who appeared to be Muslim, Portland police report.

The suspect, 35-year-old Jeremy Joseph Christian, has been charged with two counts of aggravated murder – a capital offence in Oregon.

Mr Christian has a history of posting anti-Muslim sentiments on social media, according to the Southern Poverty Law Center. He has also been filmed yelling racial slurs at a free-speech march by freelance journalist Mike Bivins.

Calls grew over the weekend for Mr Trump to comment, as even Richard Spencer – a known white nationalist – called the attacks “saddening”. But the president did not comment on the attack in the ensuing 48 hours, despite tweeting 14 times from his personal account.

In a highly shared Facebook post, journalist Dan Rather urged Mr Trump to say the names of those who died.

“Two Americans have died leaving family and friends behind,” Mr Rather wrote. “They are mourned by millions more who are also deeply worried about what might come next. I hope you can find it worthy of your time to take notice.”

Mr Trump has previously tweeted about attacks in the UK and in France. He responded within hours to an April shoot-out in Paris that killed two.