Over 80 Killed and 300 Injured in Kabul Blast, Taliban Denied Involvement 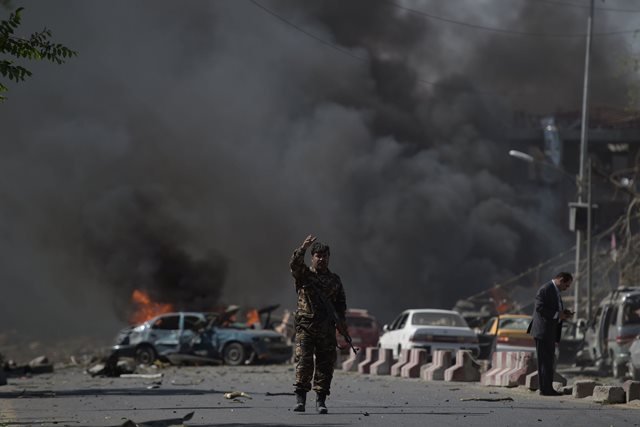 A powerful truck bomb blast on Wednesday killed at least 80 people and wounded more than 300 in Kabul, according to Afghan officials.

The explosion, one of the deadliest in the Afghan capital, came at the start of the Muslim holy month of Ramadan.

It took place in one of Kabul’s most secured areas: the diplomatic quarter, which is home to many foreign embassies and government offices.

Al Jazeera spoke to Jawid Kohistani, a security analyst and former official at Afghanistan’s National Directorate of Security, about the nature of the attack, the failures of the security forces in the country and what comes next.

Al Jazeera: The bombing has been described as “one of the biggest” to have hit the Afghan capital. How did the attacker manage to cause such destruction in a high-level security area?

Kohistani: This is not the first time that insurgents in Afghanistan have managed to attack or hit areas that are under heavy security. This has happened in the past and continues to happen. Of course, it is one of the biggest failures of the security services in Afghanistan, but at the same time, the situation in Afghanistan is very murky as we don’t know who is involved with which group or organisation.

There are many insurgent groups actively operating across the country and they have comprehensive knowledge about diplomatic or military areas. It is important to note that when attacks like this happen, there is always an insider linked with the attackers who helps plan an assault that can cause maximum damage.

Al Jazeera: The Taliban denied involvement in the attack, claiming they don’t intend to harm civilians. Is this true, and if the Taliban did not do it, can ISIL conduct an attack of such calibre in Afghanistan?

Kohistani: First of all, we don’t know whether any of the statements by the Taliban or any other insurgent group in Afghanistan are true. We don’t have any evidence of who conducted the attack.

The Taliban immediately denied responsibility, maybe because the number of civilians killed in the attack is big and they don’t want people to question their Islamic values and stance. They want to portray their fight as exclusively against the Afghan government and the foreign troops.

Speaking of ISIL, most of the suspected ISIL group members appear to be former Taliban or local militias that want to attract support or attention in the name of the group. They don’t have enough capacity, resources or influence in the country to conduct such attacks, but they do claim it in a show of power.

Al Jazeera: What happens next and who is it to blame for the killing of innocent people? Do the government and security services bear any responsibility, or is just the armed groups?

Kohistani: There are simple things that must be fixed. There is no real strategy to identify fighters and arrest them.

The Afghan government seems to be failing citizens and the military and intelligence has long lacked strategic leadership and directives which is why it has become very easy for fighters to conduct such attacks and with that being said, innocent civilians will continue to die.