Taliban Claim Deadly Attack Near US Embassy in Kabul 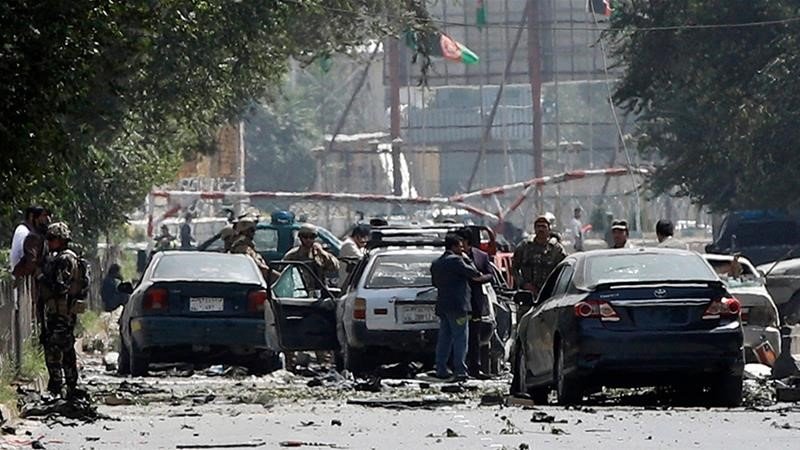 A Taliban suicide car bombing in the Afghan capital killed at least 10 Afghan civilians, a US service member and a Romanian soldier in the second such attack this week after a preliminary US-Taliban peace deal was announced.

The blast took place on Thursday in Shash Darak, a heavily fortified area adjacent to the Green Zone and home to several important complexes, including the National Directorate of Security (NDS), the Afghan intelligence service, and the US embassy.

At least 10 civilians were killed and 42 people wounded in the attack that was claimed by the Taliban,  which has been holding peace talks with the United States in Doha, Qatar, interior ministry spokesman Nasrat Rahimi said.

Hours later, the Taliban set off a car bomb outside an Afghan military base in a neighbouring province, killing four civilians.

“Peace with a group that is still killing innocent people is meaningless,” Afghan President Ashraf Ghani said in a statement.

Farid Ahmad Karimi, general manager at the Wazir Akbar Khan Hospital close to the bomb site, told AFP news agency that both civilians and security personnel were among the dead and wounded.

Surveillance footage of the attack, which occurred at about 10:10am (05:40 GMT), showed a grey minivan explode just after it cut in front of a line of white SUVs waiting to make a right turn right onto a street.

One nearby pedestrian can be seen turning and trying to run away as the minivan crashed through a barrier just before the blast.

A NATO Resolute Support mission statement said the two service members were “killed in action,” without providing details or releasing their names pending notification of their families.

The American soldier was the fourth killed in the past two weeks in Afghanistan.

The capital has been gripped by a surge in deadly violence even after the US and the Taliban reached an agreement “in principle” that would see the Pentagon pull thousands of troops from Afghanistan in return for various Taliban security promises.

The US top negotiator for peace in Afghanistan, Zalmay Khalilzad, said this week the two sides had drawn up a draft framework agreement under which US troops would leave five military bases in Afghanistan within 135 days of signing the pact.

“The Taliban are imposing their power while a deal is being finalised with them. In their claimed attacks, civilians are dying, they should immediately stop conducting such attacks when there are talks going on to bring peace in Afghanistan,” Intizar Khadim, a political analyst in Kabul, told Al Jazeera.

On Wednesday, the Afghan government expressed doubts about the prospective deal, saying officials needed more information about the risks it posed.

There are some 14,000 US troops in Afghanistan, deployed at various bases across the country.

Khalilzad is expected to meet Afghan and NATO officials to explain the draft agreement, which must be approved by US President Donald Trump before it can be signed