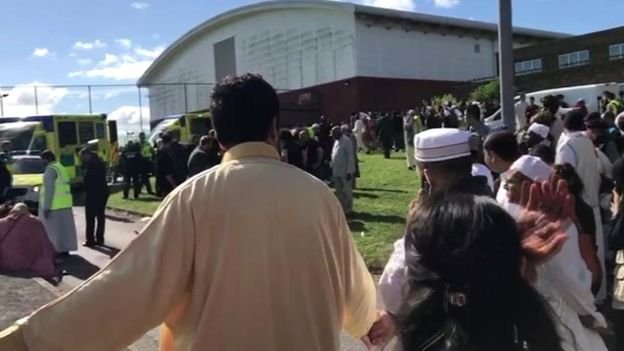 It happened at about 09:14 BST outside Westgate Sports Centre where an event was taking place to celebrate Eid.
One of the children is said to have been critically injured. Northumbria Police said the incident was not believed to be terrorism-related.

A 42-year-old woman was arrested and is in custody, police said.

No-one else was being sought and extra patrols were in the area to reassure communities, police said.
Hundreds of people were at the event to mark the end of Ramadan.

One eyewitness said: “From what I understand, [a woman who had been at prayer] was about to leave in her car and I believe she lost control.

“I ran up straight away because everyone was moving in on all the injured, trying to put water in their mouths.
“The parents of the kids were there, I had to sort of try and calm them down just to tell them the ambulance is there and they will take care of it; they know what they’re doing.

“It caused a lot of panic; everyone was screaming when it happened, it wasn’t the best of experiences.”
A North East Ambulance Service spokesman said: “We received our first 999 call at 9.15 this morning to report a car that had mounted the kerb.

“We have taken six people to hospital; they have gone to the Royal Victoria Infirmary in Newcastle; three children and three adults.”

Chi Onwurah, Labour MP for Newcastle Central, tweeted: “So sad, I was at the prayers earlier & there were so much joy & unity. Thinking of those affected by what I am told was terrible accident.”

“We were here for Eid. Everyone had just finished praying. The Imam had finished his speech and everyone was talking to their families and getting some food.

“The we heard a commotion and screaming. “I ran up to the hill. A man got out of the passenger side. He seemed distraught. “Someone was trapped under the car and then everyone just pushed the car so they were free.

“They were two children there, one of them – he was a boy about eight – was really badly injured, “There were about five doctors there so he had a lot of medical attention. We checked to see he had a pulse.

“Everyone locked arms so there was a ring of locked arms around the injured people so they had space and the ambulances could get to them.

“Everyone was distraught. I am very grateful it’s not an attack. It’s very shocking to see a child injured like that. We are all hoping that he is fine, I just want to hear that.”

“I was at a car park when I heard screaming so I ran towards the community college just a couple of minutes from me.

“There was a middle-aged man outside the community college with facial injuries and blood all over his face. “The police were already at the scene. I had seen them earlier as they were there watching the prayers. “The police put the driver of the car in the back of the police van…

“When I spoke to people at the scene that had seen what happened they said that she was exiting a car park and suddenly accelerated into a crowd of people.

“I was with a few other doctors that came to help but the police and paramedics were very quick and did not need our help.

“The Mayor of Newcastle was also there earlier for Eid celebrations.”

Doha, 25 June 2022 THE Embassy of Nepal and the Non-Resident ...
END_OF_DOCUMENT_TOKEN_TO_BE_REPLACED