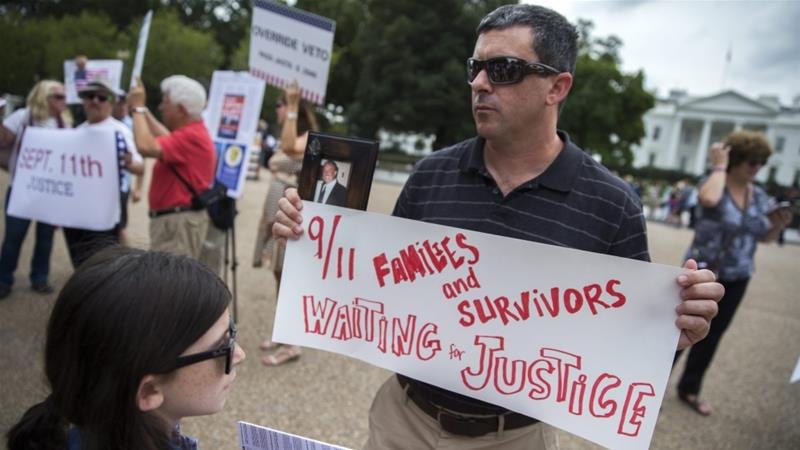 New evidence in a 9/11 lawsuit against the government of Saudi Arabia alleges the kingdom’s embassy in Washington, DC may have funded a test run for the deadly attacks in 2001, according to a US newspaper report.

The evidence was submitted as part of a class action lawsuit against the government of Saudi Arabia, the New York Post reported on Saturday.

It alleges the embassy paid for two Saudi nationals to fly from Phoenix to Washington two years before planes hit the World Trade Center, the Pentagon, and slammed into a field in Pennsylvania as part of a “dry run” for the attacks.

The victims’ lawyers, however, have said the evidence suggests “a pattern of both financial and operational support” for the 9/11 conspiracy from official Saudi sources, according to the Post.

The evidence could further reinforce the claim that employees and agents of Saudi Arabia directed and supported the hijackers.

The evidence could further reinforce the claim that employees and agents of Saudi Arabia directed and supported the hijackers.

Waleed Nassar, an international disputes attorney who represents two Saudi charities that are defendants in 9/11 litigation alongside Saudi Arabia, said “the evidence, along with much of what has been submitted, is innuendo and circumstantial”.

“The plaintiff’s burden is to show something more direct and that’s really the only hope they have to have Saudi Arabia remain in the litigation,” Nassar said.

The story cites FBI documents in the complaint alleging Saudi students Mohammed al-Qudhaeein and Hamdan al-Shalawi were in fact members of “the Kingdom’s network of agents in the US”, and participated in the conspiracy.

During the flight in November 1999, the Saudis are reported to have attempted to get into the plane’s cockpit to test security. The pilots made an emergency landing because of the incident and the men were interrogated by the FBI, which eventually let them go.

According to the Post story, the FBI confirmed the men’s airline tickets were paid for by the Saudi embassy in Washington.

Bill Law, a journalist who specialises in Gulf affairs, told Al Jazeera at this stage the claims are “only an allegation”.

He added based on the case, he believes “there are certain pointers that would suggest that there was not, perhaps direct Saudi government involvement, but there were people who were close to, perhaps the ruling family, people who were in different government departments who may have facilitated some of the early ‘dry runs’ … of what then became the horrific 9/11 attack”.

The story follows the passage of a US law last year that allows families of the victims of the September 11 attacks to sue the Saudi government.

The law, which was originally vetoed by then-president Barack Obama, allows survivors and relatives of victims to pursue cases against foreign governments in US federal court and to demand compensation if such governments are proved to bear some responsibility for attacks on American soil.

Fifteen of the 19 men who carried out the 2001 attacks were Saudi nationals. Families of the victims spent years lobbying politicians for the right to sue the kingdom in US courts for any role elements of Saudi Arabia’s government may have played.

Saudi Arabia has long denied any involvement in the attacks that killed nearly 3,000 people and marked the beginning of the US’ “war on terrorism”.