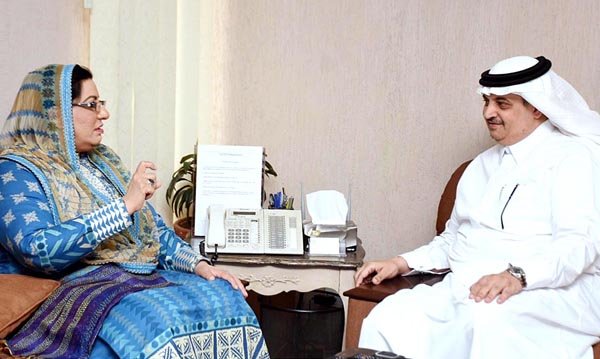 Saudi Ambassador to Pakistan Nawaf Saeed Ahmad Al-Malki Thursday said the Kingdom was keen to establish a cultural centre in Islamabad with a view to strengthen cultural collaboration between the two countries.

He expressed these views during a meeting with Special Assistant to the Prime Minister (SAPM) on Information and Broadcasting Dr Firdous Ashiq Awan here, a press release said.

He said Saudi Arabia was also looking forward to the skilled labour from Pakistan with regard to the Vision 2030. Pak-Saudi relationship is not confined to the governments, rather it represents a people-to-people bonhomie, he added.

Dr Firdous welcomed Saudi Arabia’s keenness to set up a cultural centre in the capital city of Pakistan and assured her full assistance in that regard.
The SAPM said Pakistan was enjoying warm relations with Saudi Arabia since the birth of the country in 1947 as this relationship was rooted in centuries old religious, cultural and commercial links between people of the two countries.

The government and people of Pakistan hold the Royal Family in highest esteem and have deep veneration for Custodian of Two Holy Mosques, King Salman bin Abdul Aziz Al-Saud, she added.

Dr Firdous said the recent visit of Saudi Crown Prince to Pakistan was of immense importance as both the countries inked agreements to further solidify economic cooperation and strengthen strategic partnership.

The remarks of Crown Prince “I am Ambassador of Pakistan in Saudi Arabia” is reflective of strong fraternal bond that exists between the two brotherly countries.
She said Pakistan had always received generous economic and financial assistance from Saudi Arabia at times of crisis.

The two sides also discussed executive program for culture and media cooperation between the two countries and decided to work out a calendar of cultural activities.