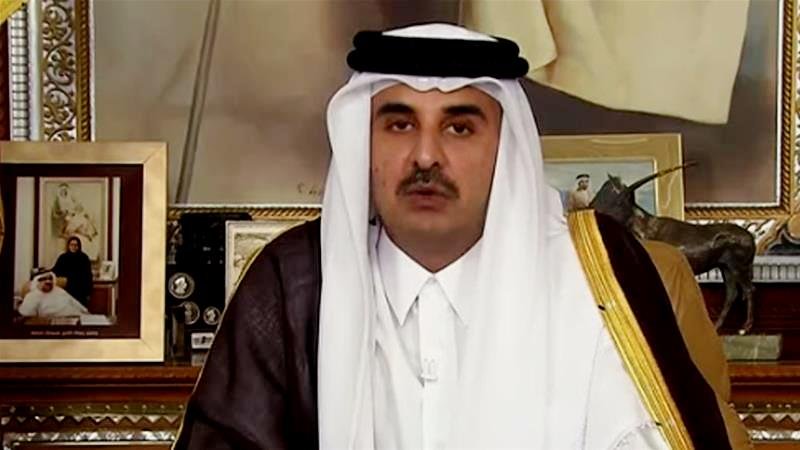 The Emir of Qatar Sheikh Tamim bin Hamad Al Thani has said that his country is ready for dialogue to resolve a diplomatic crisis with a Saudi-led group, but stressed that any solution to the crisis must respect his country’s sovereignty.

“We are open to dialogue to resolve the outstanding problems,” so long as Qatar’s “sovereignty is respected,” Sheikh Tamim said in a televised address on Friday, his first since the June 5 rupturing of ties with Saudi Arabia, Bahrain, the United Arab Emirates and Egypt.

Sheikh Tamim said his country was targeted by unprecedented campaign. He valued Kuwait’s mediation and the support of the United States, Turkey and Germany for the efforts to resolve the crisis.

The Emir thanked Turkey for “putting into force quickly a cooperation agreement signed between us and meeting our basic needs”.

“It is clear that the campaign against us was pre-planned. We took a test and passed it,” Sheikh Tamim said.

The Emir hailed the solidarity and resolve that Qataris have shown in the face of the crisis, and said it would make his country, which will host soccer’s World Cup in 2022, even more resilient.

“It was a true ethical trial. Our people have passed the test with colours, and we have held steadfast to our principles and traditions even in the time of trials, simple for the reason that we respect ourselves.

“I call on all of you to continue to hold on to that.”

He also said that Qataris are called upon to open economy for investments. “I have made instruction to diversify our economy.”

The Saudi-led sanctions include closing Qatar’s only land border, refusing Qatar access to their airspace and ordering their citizens back from Qatar. The measures have disrupted the import of food and other items, and caused foreign banks to scale back business with Qatar.

Initially, the Saudi-led bloc issued a tough 13-point list of demands needed to resolve the crisis, including shutting down news outlets including Al Jazeera, cutting ties with Islamist groups such as the Muslim Brotherhood, limiting ties with Iran and expelling Turkish troops stationed in the country.

Qatar refused to bow to the demands within a 10-day deadline, and the anti-Qatar bloc has begun to shift its focus toward six principles on combatting extremism and terrorism.

Earlier in the day, US Secretary of State Rex said the US was satisfied with Qatar’s efforts to address concerns about terror financing and counter-terrorism.

He urged Qatar’s neighbours to lift a land blockade as a “sign of good faith”.

Doha, 25 June 2022 THE Embassy of Nepal and the Non-Resident ...
END_OF_DOCUMENT_TOKEN_TO_BE_REPLACED