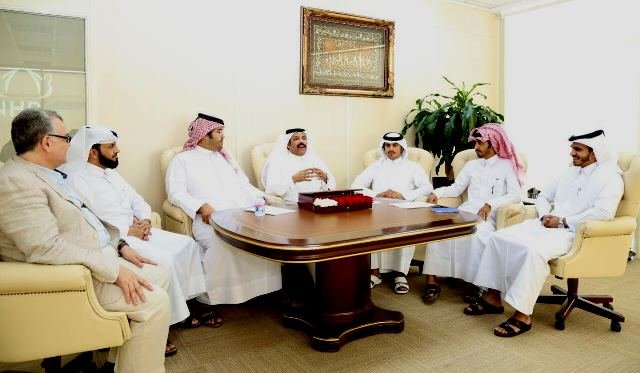 Jaber Hwail, Director Legal Affairs briefed on the role, functions and objectives of the Committee and its working methods to receive complaints and legal nature.

He informed the visiting students about the nature and types of petitions received by the Commission and how to resolve legal methods as per the Commission’s mandate. Hwail told that the Commission has quasi-judicial powers, but is considered advisory body in the first place. He said that the committee was established in 2002 with the aim of protecting and promoting human rights. The law of its establishment stipulated independence.

Since its establishment, NHRC has sought accreditation by the Global Alliance of National Human Rights Institutions (GANHRI). The recent amendments to the provisions of membership and immunity in its law Which had led to the strengthening of the exercise of its terms of reference, as required by the Paris Principles, and noted that the Committee had adopted Class A in 2010 and had undergone further review in 2015.

He told that NHRC enjoys as Vice President of Charter Committee of Arabs Commission on Human Rights. He explained that the Arab Human Rights Committee is the only Arab mechanism that functions as a mechanism independent of the governments and the Secretariat of the League, noting that it was founded in 2009 under the Arab Charter for Human Rights issued by the Council of the League of Arab States at the summit level in Tunisia in the year 2004.

He said that Since its establishment, the Charter Committee has endeavored to ensure the participation and contribution of civil society organizations in the mechanism of the Committee’s work through the process of preparing initial and periodic national reports submitted by States Parties or by contributing to the review of reports by States at review sessions Initial and periodic reports.

He told that the committee’s interest comes in dealing with civil society organizations in view of the role played by civil society in completing the elements of the image that the committee seeks to form regarding the human rights situation of the country which submitted its report to the committee for study according to the provisions of the charter. In this context, the Commission on Human Rights seeks to collect the largest number of specific, reliable and objective information from non-governmental organizations with a view to obtaining a serious and independent assessment of the progress achieved and difficulties in implementing the provisions of the Arab Charter on Human Rights at the national level.

“The Committee publishes the reports of the member States for public access to the national human rights institutions, NGOs and stakeholders, and the Committee receives parallel reports prepared by national human rights institutions, non-governmental organizations and others. Written contributions could then be made on the reports and observations made on States parties’ obligations as well as recommendations.

The Committee may also discuss the report of the State party being discussed in public. National human rights institutions, bodies and stakeholders, human rights NGOs accredited in the State concerned, Arab League, OIC, and the United Nations may attend the meetings as observers.

20 January 2022 By Ashraf Siddiqui More than 7,000 books of different ...
END_OF_DOCUMENT_TOKEN_TO_BE_REPLACED