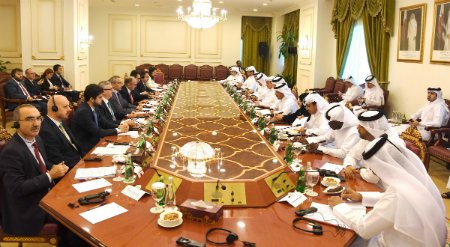 At the outset of the meeting, Dr AlHammadi commended Turkey’s successful organization of 4th session of the Qatari-Turkish Higher Strategic Committee in Istanbul on November 26, 2018. He praised the Republic of Turkey’s honorable stance regarding the blockade imposed on Qatar since June 2017.

Dr. Al Hammadi said that the Committee, through its four previous sessions, has contributed advancing the two countries’ relations to the level of strategic partnership. Referring to the progress in economic bilateral relations, he said: “The volume of trade exchange between the two countries last year amounted to USD 2.4 billion, an increase of (78%) from 2017, and this increase reflects the strength of trade relations.”

He stressed the importance of supporting mutual visits of trade delegations, chambers of commerce, businessmen and the private sector, as well as the exchange of expertise between stakeholders and cooperation between small and medium enterprises.

He concluded by saying that the State of Qatar has enacted attractive procedures for foreign capital, which allows investment of 100 percent of capital in many sectors, in addition to providing many incentives and benefits for foreign investors.

Ismail S. Oglu, Deputy Director General of the Middle East Department, Ministry of Foreign Affairs of Republic of Turkey said that the State of Qatar and the Republic of Turkey share views on many regional issues. He extended thanks the State of Qatar for its honorable stance rejecting the failed coup attempt in Turkey in 2016, calling for intensified cooperation to achieve the aspirations and hopes of the leaders and peoples of the two countries.

Fikret Ozer, Turkish Ambassador to Qatar stressed the depth of bilateral relations, noting that relations have been developing and prospering since the first meeting of the Higher Strategic Committee between the two countries in 2015. This is evidenced by the number of agreements and memorandums of understanding signed since then, he added.

Among the participating delegates included representatives of both countries from various governmental and private sectors. On this occasion, , a number of draft agreements and memoranda of understanding between the two sides were finalized and are expected to be signed during the fifth session of the Higher Strategic Committee.