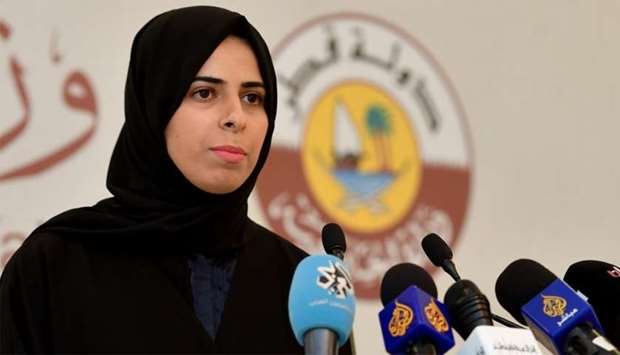 The State of Qatar valued the report submitted by the UN technical mission from the Office of the High Commissioner for Human Rights (OHCHR) which visited Doha between Nov. 17 and 24. The visit took place to investigate the repercussions of the siege on the human right practices and the humanitarian situation of the citizens, residents and GCC citizens who stay in Qatar.

The State of Qatar expressed its satisfaction with publishing the report which documented the human rights violations related to the siege imposed on Qatar and the GCC crisis.

Speaking at a press conference held on Wednesday, Foreign Ministry Spokesperson Lulwah Al Khater highlighted the importance of this report lies in it being a first-time UN documentation. Al Khater explained there are other existing reports issued previously by non-governmental organization and described this UN report as added value.

She praised the important role carried by the technical mission and the High Commissioner and added, when the siege on Qatar was announced on Jun. 5, the High Commissioner highlighted on Jun. 14 the need to quickly settle the crisis especially with regards to the unjust procedures that affected citizens and individuals. She also praised all the effective efforts carried out by all rights organizations.

Al Khater said the report confirms and proves the hefty financial and moral damages that fell on the citizens and residents of the State of Qatar. She added that these damages affected the citizens of the siege countries which is an important issue, especially when the siege countries are denying these damages. She said this report proves confirms their occurrence beyond any doubt.

The Foreign Ministry Spokesperson said the report proved that the measures made by the siege countries did not differentiate between the government of the State of Qatar and the citizens and residents, as alleged by those countries. She added that this issue is essential if we take into account the claims of the siege countries that these measures are directed against the government only, which is a baseless allegation, proved in the report.

Al Khater said, the report has concluded the ongoing debate on whether it is a diplomatic blockade or a siege, adding that the report expressly stated the actions taken against the State of Qatar exceeded the limits of diplomatic procedures.

She added that it is impossible to describe those procedures as just a diplomatic blockade, because it has affected humanitarian, rights, economical and other aspects. Moreover, the report described these measures, especially the economic ones, as an “economic war,” this is an issue that must be taken into consideration, Al Khater added.

Al Khater also said since this report is issued by a UN entity, which the siege countries are members of, they can no longer claim that the reports supporting the position of the State of Qatar are issued by non-governmental organizations and may not be recognized. She also noted that the siege countries refused the entry of the technical missions to their countries, where she urged them to allow the missions to enter to document the violations.

Qatar Foreign Ministry Spokesperson Lulwah Al Khater said that the report submitted by the UN technical mission from the Office of the High Commissioner for Human Rights (OHCHR) documented the hate speech broadcast on the siege countries’ media. She added that the report discussed some of the work produced by the siege countries which included acts of incitement against the State of Qatar.

On the measures that the State of Qatar will take, Al Khater said that the committee established to determine the damages resulting from the violations will be the legal basis for international action. That action will focus on the violations of the siege countries to agreements and contracts. She noted that the report enhances the evidence of the violations of the siege countries. She said that action by law organizations and firms have already begun. She added that the State of Qatar hopes that the issues can be resolved through diplomatic channels and dialogue, but maintained that residents and citizens whose rights have been violated deserve to have the rights back and the State of Qatar will do its utmost in that regard.

Al Khater highlighted the big role played by the Emir of Kuwait Sheikh Sabah Al Ahmed Al Jaber Al Sabah since the beginning of the crisis, saying that Qatar’s appreciation was reflected in many instances including the participation of Emir Sheikh Tamim bin Hamad Al-Thani in the GCC summit that took place in Kuwait. She renewed the State of Qatar’s position which supports a solution based on mediation.

She noted that all lines of communications with the siege countries were still cut, expressing hope that a dialogue can take place in the future in order to resolve the situation. She stressed that all world countries support Qatar, evidenced by the improvement in ties between those countries on one side and Qatar on the other side. She also expressed hopes that ties prosper and strengthen between all countries around the world.

20 January 2022 By Ashraf Siddiqui More than 7,000 books of different ...
END_OF_DOCUMENT_TOKEN_TO_BE_REPLACED