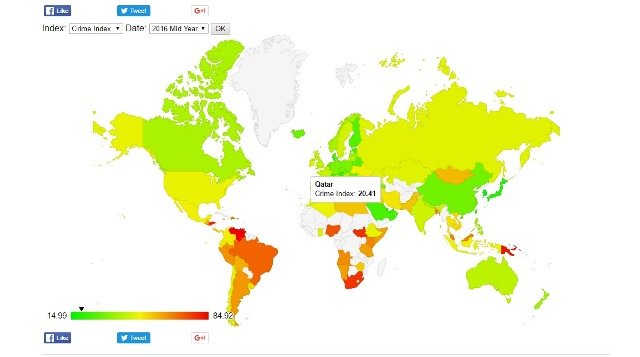 10 Dec 2016
The State of Qatar achieved a new global distinctive achievement in the field of security by clinching first rank in the MENA region and Arab States and seventh place at global level in the lowest crime rate, according to the Global database of Crime Index for Countries 2016, issued by Numbeo.

According to the latest index, South Korea ranked first followed by Singapore, Georgia, Taiwan, Japan and Hong Kong came in the leading six countries respectively. The database showed that Qatar marked 20.41 points in the crime index while South Korea indicated 14.99 points only.

The Numbeo surveys many aspects about the crime and safety in the countries and cities, which include opinions about the seriousness of the crime, change of crime level in the past three years, walking during daylight and night, robbery level, stealing of cars, physical attacks by strangers, being insulted in the streets, being subject to any attacks because of skin colour, ethnic origin or religion etc.

Previously the State of Qatar has been placed top in the MENA region in Global Peace Index published by Institute for Economics & Peace (IEP) continuously till date since 2009. The IEP, headquartered in Sydney, Australia uses several relevant indicators related to peace and safety including political stability, level of crime in the community, level of abuse among community members, internal conflicts and relations with neighboring countries and terrorist crimes etc.

Strategy of the Ministry of Interior

It is noteworthy that the State of Qatar has accomplished this great reputation by the constant efforts and the keenness of the security authorities in the State.

The Ministry of Interior has been working to realize the maximum security and stability in the community through its strategies that are compatible with the vision of Qatar 2030, in order to build an integrated security system supported by the development of the Ministry.

The Ministry has established a number of security departments and expanded their sections and functions to suit the development and modernization witnessed by the State in order to achieve a good and safe environment for security work.

Moreover the Ministry has tightened patrols to prevent crimes before their occurrence and enjoy security by all segments of the society. Most of services provided by the Ministry have been electronic to save the time and efforts of the people and enjoy the benefits of the technological advancements as it would add to realize safety and crime prevention in all levels.