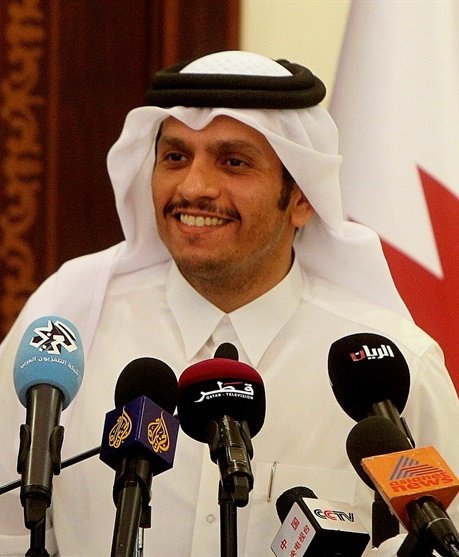 Sheikh Mohammed bin Abdulrahman Al-Thani, Foreign Minister of Qatar said hacking of QNA’s official website is a cyber crime, stressing that it was a crime punishable by law, Qatar would not rush to declare the results until the investigation was over.

He said that Qatar will address the media campaign targeting Qatar News Agency’s (QNA) website and attributing false statements to HH the Emir Sheikh Tamim bin Hamad AlThani. ‘An investigation team is conducting a full criminal investigation to bring the perpetrators to justice’, he said, noting that the findings of the investigation would be revealed in a transparent manner.

Addressing at a joint press conference in Doha alongwith Yussef Jarad Omar Ahmed, Foreign Minister of Somalia, Qatar Foreign Minister was replying to questions on the hacking of Official news agency’s website, he said “It is clear that there is a media campaign targeting the State of Qatar and we will definitely address it.”

“In the past five weeks we were surprised by the publication of 13 opinion articles on Qatar by different writers in the United States,” Qatar Foreign Minister told.

On the same day of the cyber attack on QNA’s website, a conference on Qatar was held in the US “to which we were not invited, but all those who wrote these articles against Qatar were present”, he said ‘wondering whether it was a coincidence or not.’

Foreign Minister expressed his surprise over the attitude of some of the media which adopted these false statements, despite the issuance of clear statements of denial by QNA , what was going on at these media reflected their low level of professionalism.

“What has been seen from the GCC public opinion in particular confirms a full awareness that rises far above the level of these media,” he said.

Replying to a question on Qatar’s relationship with Gulf states, Sheikh Mohammed bin Abdulrahman Al-Thani, Foreign Minister of Qatar said Doha has always maintained strong and fraternal relations with them because Qatar strongly believes that GCC countries should be one entity”.

On the question with the reference of 2014 development in the relations with some of the GCC states, Qatar Foreign Minister said that what was happening today had nothing to do with the “misunderstanding” that occurred between Qatar and some of the GCC countries in 2014. In this regard he gave example of recent summit in Riyadh and of remarks of US President Trump on US-Qatar fraternal relations. “If there is something different that we do not know about, that’s something else,” He said.

On the issue of cyber security in Qatar, Sheikh Mohammed said the electronic security system and firewalls in the country were of the highest standards and were strong and solid, adding that all state agencies used the latest technology and cooperated with each other under the government umbrella.

“Cyber attacks and hacking operations are inherently sophisticated while security systems are not necessary able to keep pace with the fast development of cyber attacks,” the Minister commented.

“Qatar will take a number of additional steps to strengthen its electronic security system,” he said, reiterating that the firewalls and means of protection in all sectors of the state were at the highest level and very difficult to be hacked.

“Contacts with the brothers in the GCC Member States are ongoing and never stop,” Qatar Foreign Minister said, noting that there was no contact on the issue of the cyber attack because there was a clear picture of what had happened.

A question with regard to who is behind the hacking of QNA’s website, the Foreign Minister said that there was no evidence at this time whether the attack was from outside or inside Qatar. He told that once the facts of the case and the evidence were collected, Qatar would do what it deemed appropriate in this regard.

“If this cyber attack was committed in the country it shall be considered as a cyber crime and the perpetrators shall be prosecuted according to the law.”

In response to a question on Qatari-US relations, Foreign Minster said that both the countries have strong and strategic relations and that can be judged from recent talks between Emir of State of Qatar and US President Donald Trump in Riyadh. President Trump acknowledged the role being played by Qatar in combating terrorism and describing Qatar as a partner in this regard.

On a question on the future of US military base in Qatar, Sheikh Mohammed bin Abdulrahman Al-Thani said that Al Udeid Military Base in Qatar is governed by an agreement between Qatar and the United States of America, in case of the occurrence of anything related to this matter, will be according to the terms of the agreement.