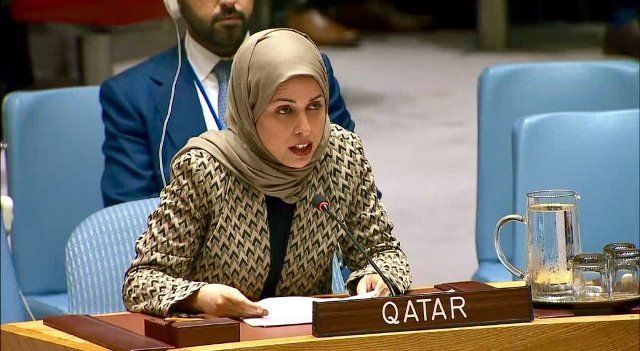 The State of Qatar reiterated its commitment to mediation to settle conflicts and disputes by peaceful means, affirming that its interest in mediation lies at the heart of the priority it attaches to the maintenance of peace and security and the peaceful settlement of disputes.

The State of Qatar also underlined its keenness on enhancing and supporting the sustainability of peace, as it contributed to the preparation for the UN General Assembly High-level Meeting on Peacebuilding and Sustaining Peace in April.

In a statement at the debate held by the Security Council on “Maintenance of International Peace and Security: Mediation and the Peaceful Resolution of Conflicts”, Sheikha Alya Ahmed bin Said Al-Thani, Permanent Representative of Qatar to the United Nations said that the State of Qatar has committed itself to being a partner of the international community in the face of common challenges and has not defied its approach at the regional and international levels, adding that despite the unjust siege and illegal unilateral measures imposed on the State of Qatar since June 5, 2017, it continues its policy consistent with its obligations under the Charter of the United Nations and international law and working to settle disputes and conflicts by peaceful means.

Sheikha Alya Al-Thani also renewed the appreciation of the State of Qatar for the mediation led by Amir of Kuwait Sheikh Sabah Al-Ahmad Al-Jaber Al-Sabah to resolve the Gulf crisis and contribute to enhancing the security and stability of the region and international peace and security.

In her statement, Sheikha Alya said that mediation has always been an essential part of diplomacy, conflict resolution, negotiation, arbitration and reconciliation as the first choice in dealing with disputes. This importance is reflected in the Charter of the United Nations, in particular chapter VI.

She noted that mediation is not a substitute for other tools to prevent conflicts, but is rather integrated with such tools within the framework of a comprehensive strategy for the prevention, resolution and management of conflicts. She stressed the importance of addressing the root causes of conflicts while recognizing the link between peace, security, development and human rights.

In recent years, the international community has become increasingly aware of these realities and of the importance of giving priority to preventive diplomacy and the peaceful settlement of disputes, including through mediation, HE Sheikha Alya said, noting that the UN General Assembly adopts every two years a resolution on mediation submitted by Turkey and Finland and supported by a large number of States, including the State of Qatar.

She pointing to the report of the Panel on United Nations Peace Operations which stressed the importance that the mandates of peace processes must focus on the need to achieve political solutions to crises.

Qatar’s Permanent Representative to the United National Ambassador Sheikha Alya Ahmed bin Said Al-Thani expressed satisfaction at the evolution of mediation arrangements and tools at various levels, stressing that it was necessary to keep pace with the changes in the nature of conflicts and threats to peace and security.

She praised the increasing number of mediation players at various levels, noting that the mediation agenda had witnessed progress and practical achievements at the United Nations level, particularly since the establishment of the High-Level Advisory Board on Mediation at the General Assembly to support mediation efforts around the world.

Sheikha Alya stressed the important role of the civil society and the private sector, noting that the success of mediation strategies in many cases depended on the identification and involvement of appropriate stakeholders. She also noted the importance of involving both women and young people in peacemaking and mediation efforts to ensure effectiveness and sustainability of those efforts.

Sheikha Alya reviewed the experience of the State of Qatar in the field of mediation, especially in the Arab and Islamic region, which resulted in many successes in the resolution and settlement of disputes or avoiding further escalation. These efforts have been recognized and supported by the UN Security Council.

She stressed importance of integrity, honesty and inclusiveness for the success of mediation, affirming that the purpose of mediation is the success of dialogue, reconciliation and settlement. She noted the need to take into account the various aspects of the conflict and to recognize the specificity of each case.

She explained that the primary responsibility for the settlement of disputes lay with the parties to the conflict, stressing the importance of their participation and their full commitment to settlement, and the realization of the common interest of achieving reconciliation.

The State of Qatar looks forward to continued Security Council support to mediation actors and stakeholders for the peaceful settlement of disputes in order to settle and prevent disputes and to spare future generations the dangers and resulting consequences, Qatar envoy to United Nations concluded.