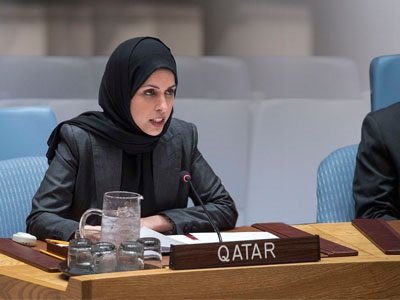 The State of Qatar has reiterated its cooperation with various United Nations bodies related to the fight against terrorism, including Security Council’s Committees, expert teams and the Counter-Terrorism Implementation Task Force (CTITF), stressing support of their efforts in fulfilling their mandate in order to assist Member States.

This came in a speech delivered by the Permanent Representative of the State of Qatar to the United Nations, HE Ambassador Sheikha Alia Ahmed bin Saif Al-Thani, before the United Nations General Assembly on “Strengthening the Capacity of the United Nations System to Assist Member States in the Implementation of UN Counter-Terrorism Strategy”.

In this context, Ambassador Al-Thani pointed to the financial contribution made by the State of Qatar in support of the CTITF, stressing the ongoing coordination to strengthen partnerships in capacity-building and launch of projects aimed at preventing violent extremism and addressing the roots of terrorism.

The State of Qatar attaches great importance to working within regional and international mechanisms to eradicate terrorism and address its causes, reaffirming in all forums its strong condemnation of terrorism regardless of its motivation, in all its forms and manifestations, wherever and by whomever is committed, she stressed.

Since the adoption of the United Nations counter-terrorism strategy, the State of Qatar has been keen to fully implement its measures to address conditions conducive to the spread of terrorism, enhance international cooperation in the field of prevention and combating of terrorism and to fully comply with the international obligations of the UN Security Council relating to the fight against terrorism and its financing, Ambassador Al-Thani added.

The State of Qatar is keen to strengthen bilateral cooperation to combat terrorism and deprive terrorist groups of funding sources, she said, referring to the bilateral agreements for cooperation and coordination signed by Qatar, such as the recently signed Memorandum of Understanding (MoU) with the United States against terrorism.

She stressed the State of Qatar’s keenness to continuously update its national laws and regulations related to the fight against terrorism and its financing to cope with any emerging terrorist challenges, adding that Qatar as a distinguished international partner in the joint international efforts to combat terrorism follows a comprehensive approach in dealing with the phenomenon of terrorism in various military, financial and legal levels.

She also shed light on the State of Qatar’s role focused on strengthening all these efforts by supporting technical capacity-building to prevent violent extremism leading to terrorism and supporting efforts to eliminate terrorism by addressing the causes leading to an environment conducive for terrorism for terrorist activities such as security vacuum, injustice, tyranny, repression, marginalization and discrimination, which provide an incubator environment for terrorism.

In this regard, Ambassador Al-Thani stressed the importance of preventing terrorism, noting the State of Qatar’s initiative to hold a General Assembly’s meeting on the ‘Prevention of Children and Young People from Violent Extremism’ in June 2016.

Ambassador Sheikha Alia Ahmed Bin Saif Al Thani praised the efforts of the State of Qatar to prevent the threat of terrorism, pointing to the Silatech initiative, which aims to provide employment opportunities for young people in the region ,covers more than 15 countries and has funded since its inception tens of thousands of projects run by young people at the request of international partners.

She also referred to Educate A Child (EAC) programme aimed at addressing the environment exploited by terrorists to recruit young people by providing educational opportunities for children who have lost their right to education due to conflicts, wars and natural disasters.

The State of Qatar pursues a comprehensive approach that involves the consolidation of a culture of peace, tolerance and dialogue among civilizations, cultures and religions, HE Al-Thani concluded, noting that Qatar hosts a range of leading intellectual and enlightenment centers in the region and also encourages freedom of expression and freedom of the press to contribute to countering any attempt to exploit the fight against terrorism as a pretext for political ends.