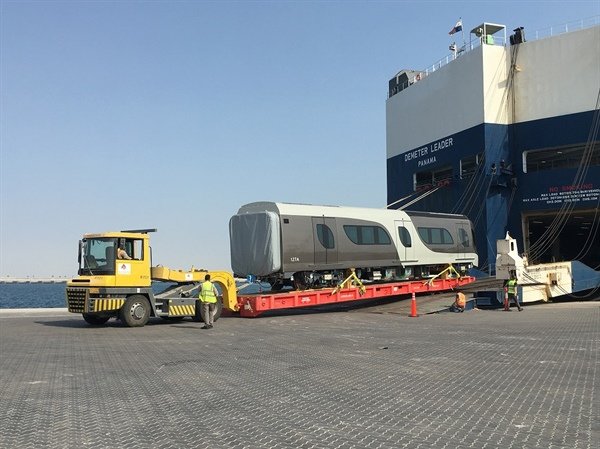 Qatar Railways Company (Qatar Rail) announced that it received the new batch of train sets at Hamad Port yesterday according to an agreement signed earlier with manufacturer The Kinki Sharyo Co., Ltd. The batch consisting of two trains and comes alongside 35 additional trains set to arrive in the country over the coming months. According to the delivery schedule, the last batch will arrive by the end of the second quarter next year, increasing the total number of Doha metro trains serving the network from 75 trains to 110.

The new trains will be moved to the Qatar Rail Depot in Al-Wakra for assembly and testing purposes to be integrated later on into the existing rail system; All the necessary tests will be conducted on to ensure the highest standards of safety are met.

The additional trains will contribute to increasing the capacity of the metro network, as the country gears towards the FIFA World Cup Qatar 2022™, which is expected to attract over a 1.5 million visitors. The trains will also serve the future expansion of the Doha Metro lines that Qatar Rail company intends to implement.

Eng. Abdullah Abdulaziz Al-Subaie, Managing Director and CEO of Qatar Rail stated: “The Doha Metro network provides a reliable and comfortable mean of transportation within the city as it extensively covers and connects the key destinations in Doha.  The additional train sets will undoubtedly boost the network’s capacity and decrease the headways on all the lines. Moreover, providing a comprehensive and seamless transport experience for visitors and crowds during the FIFA World Cup 2022. In addition, this strategic move will contribute to the achievement of the project’s long-term goals represented in the expansion of the current network.”

The Doha metro design embodies the Qatari heritage and culture combined with the state-of-the-art technology. It is designed and manufactured by  Kinki Shario Co., Ltd. at its factories located in Osaka, Japan. The Doha metro is considered one of the fastest driverless trains in the world and the fastest ever in the region, with a speed that reaches 100 km/h. Each train consists of three metro cars; one for the Gold and Family Class and two for the Standard Class. The gold class has 16 seats while the family car has 26 seats, and the two standard class cars have 88 seats, in total. The Doha Metro is distinguishable by its modern design that reflects the unique identity of Qatari heritage which is embodied through the exterior and interior designs.