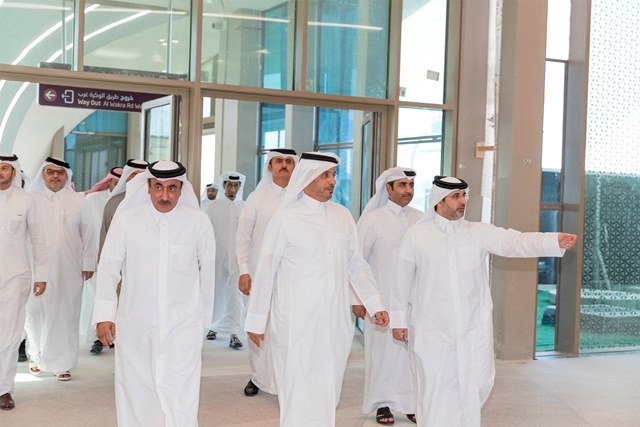 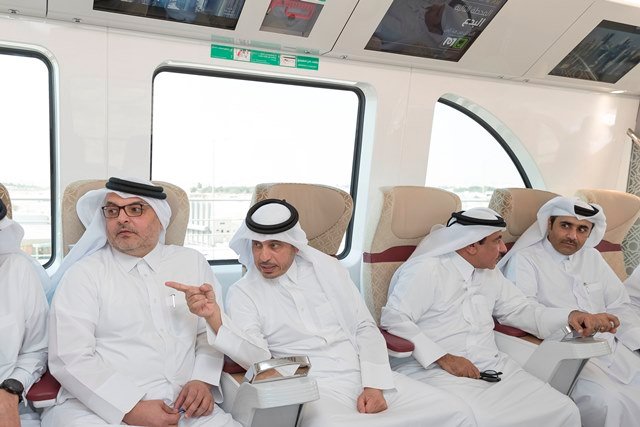 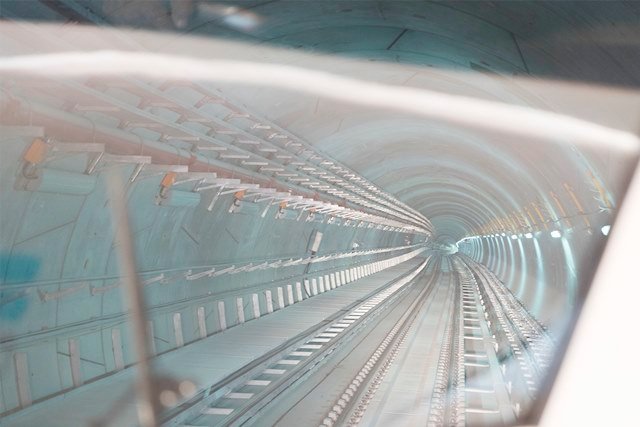 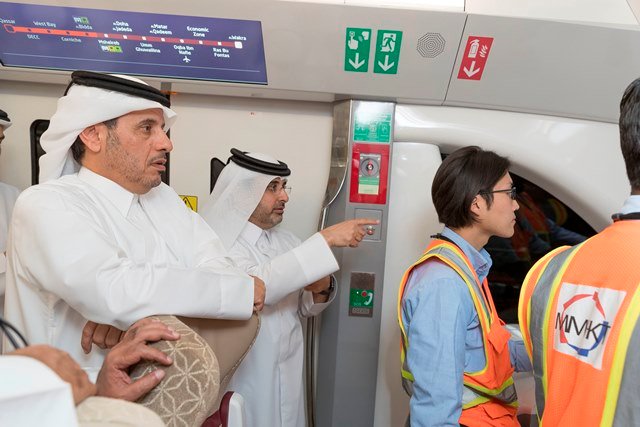 Prime Minister and Minister of Interior, Sheikh Abdullah bin Nasser bin Khalifa Al-Thani, visited the Doha Metro Economic Zone Station today on Tuesday. During the visit, Prime Minister of Qatar observed progress at the site and also reviewed key achievements made by the company in 2017 as well as future plans.  Present on the occasion were Jassim bin Saif Al Sulaiti, Minister of Transport and Communications, Ministers, members of the Board of Directors of Qatar Rail.

The state-of-the-art Economic Zone Station is located at the intersection of F-Ring Road and the Al Wakra Road.  The completed station will be able to accommodate up to 15,000 passengers per hour and will serve as the focal point and main transport hub for the Qatar Economic Zone in Ras Bu Fontas, close to Hamad International Airport.

The design of the station is representative of the Doha Metro.  Traditional Qatari themes and motifs are blended with modern architecture to achieve a look and feel with a uniquely Qatari aesthetic whilst also being safe, sustainable, functional and modern.  Passengers travelling through Economic Zone Station will enjoy the very best in station design – wide internal spaces, natural lighting, and smooth passenger flows – all of which will contribute to a positive experience for the customer.

Prime Minister & Interior Minister of Qatar inspected one of the new trains passing through the tunnels between Economic Zone and Oqba Ibn Nafea Station, passing along the viaduct to Al Wakra.  The new fully driverless trains are amongst the fastest in the region, capable of speeds up to 100km/h, and will deliver a safe, reliable and fast commuter service for passengers.  Some of the ultra-modern features of the trains include digital media and signage, integrated journey planning, self-service machines ticketing, intelligent air-conditioning, and full Wi-Fi coverage across the entire network.

Jassim bin Saif Al Sulaiti, Minister of Transport and Communications, said 2017 has been a year of unprecedented success for the transport sector in Qatar. We have come leaps and bounds in laying the foundations for our connected nation and the Doha Metro project forms the fundamental backbone of the integrated public transport system supporting Qatar’s National Vision 2030. We look forward to further progress being made by Qatar Rail in 2018 as a vital contributor to the implementation of the key transport infrastructure project.
He said that we are on track to deliver this new and paramount transport solution to the nation when the network becomes operational in 2020. The progress made and challenges overcome are a testament to the wise guidance of our judicious leadership, Sheikh Tamim bin Hamad al-Thani, the Emir of the state of Qatar, and the close supervision of Prime Minister and Interior Minister Sheikh Abdullah bin Nasser bin Khalifa Al-Thani made expectations not only being met, but exceeded.

Under the guidance of Sheikh Tamim bin Hamad al-Thani, the Emir of the state of Qatar, facilitated the progress of Qatar Rail projects which was translated to a key tangible achievements. From creating sufficient capacity at Hamad Port to handle the import of materials necessary for the successful completion of the projects to the relocation of the Building Automation & Control System (BACS) Centre for the Doha Metro Stations from Dubai to Doha, we can promise the nation that we are on track for a fully operational service by 2020.

Eng. Abdulla Al Subaie, Managing Director & CEO of Qatar Rail, said The unprecedented challenges for Qatar Rail that were faced in 2017 have served only as a catalyst for adaptability and change. The resilience and will to succeed in the face of adversity was evident in every aspect of our operations. We have introduced a number of initiatives on the project management level which propelled us to succeed but indeed excel and deliver our best performance to date. We are proud of all the efforts of our staff and partners who together worked tirelessly to overcome these unexpected challenges. With renewed resolve, we look forward to accomplishing even more in 2018, working to turn the vision of Emir Sheikh Tamim bin Hamad al-Thani into a reality.

Qatar Rail has set ambitious goals for 2018.  These focus on delivering projects on time and within budget.  All remaining MEP and architectural fit-out works for the Doha Metro will be completed this year, with overall Metro progress to reach 90%.  This will see completion of the Red Line up to Al Qassar and the start of trial operations.  Qatar Rail also looking forward to the arrival of the first batch of trains for the Lusail Tram.

Qatar Rail will continue to build its brand and develop its customer base in anticipation of the start of passenger services on the Doha Metro.  Communication with the public will begin with the launch of focused community awareness campaigns, aiming to not only educate and inform the public but also to highlight the benefits of the new transportation system.

Doha, 25 June 2022 THE Embassy of Nepal and the Non-Resident ...
END_OF_DOCUMENT_TOKEN_TO_BE_REPLACED