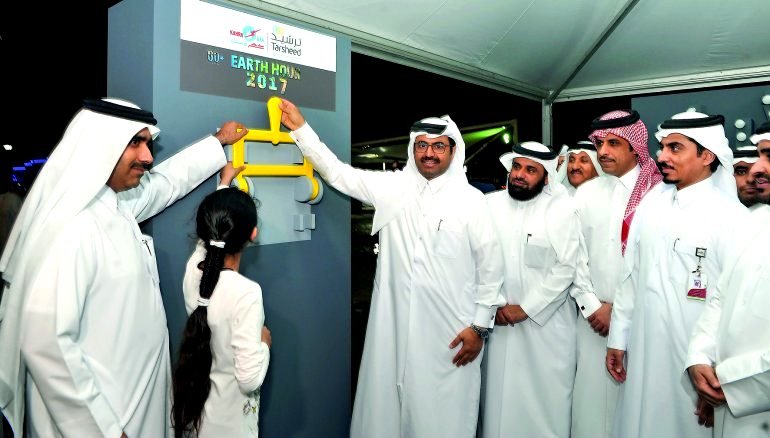 Minister of Energy and Industry Dr. Mohammed bin Saleh Al Sada said observing the Earth Hour is a symbolic demonstration to raise public awareness on the importance of conserving natural resources and thus protecting the Earth from climate change and global warming.

Dr. Al Sada said in remarks on the margin of KAHRAMAA’s celebration of the event on Saturday, that the State of Qatar joins the world in the celebration of Earth Hour, explaining that this started in 2007. Last year, Qatar and 162 other countries in the world took part in the demonstration, which takes place every last Saturday of March from 8:30 to 9:30 pm, where unnecessary lights and electrical appliances are switched off, he said. Besides joining countries of the world, Qatar supports efforts to raise awareness about energy conservation, he added noting that this event has become an annual tradition in Qatar.

On KAHRAMAA’s success in the rationalization of energy consumption through the “TARSHEED” program, Minister said that there is a special department to carry out TARSHEED’s projects which have come a long way, stressing that KAHRAMAA will continue to work in the implementation of various programs to rationalize energy consumption in order to meet the aspirations of the State of Qatar.

Qatar General Electricity and Water Corporation (KAHRAMAA) today celebrated the Earth Hour in support of the global initiative, in which lights and non-essential electrical devices are switched off for one hour.

On the occasion, President of Qatar General Electricity and Water Corporation (KAHRAMAA) Essa bin Hilal Al Kuwari said that Earth Hour is an international initiative which is being observed in late March each year with the aim of educating people on the importance of reducing carbon emissions by switching off unnecessary devices and lights for an hour starting at 8:30 pm in order to convey a message to the community about the importance of preserving the planet and preserving resources through simple initiatives.

A number of major organizations including public & private sector observed Earth Hour by switching off un-necessary electronic devices for one hour from 0830 PM yesterday.