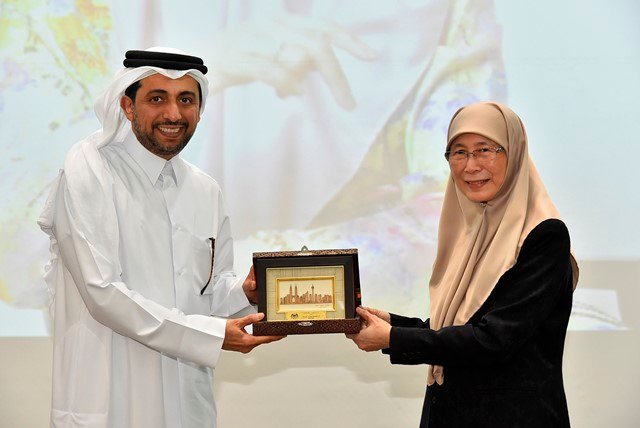 Dato’ Seri Wan Azizah Wan Ismail, Deputy Prime Minister of Malaysia in her keynote address today at Qatar University’s (QU) said that two elements are important in creating convergence in Malaysia, the first is developing strong institutions, and the second is developing a new breed of leaders capable of leading these institutions and usher in a new era. “Leaders with a high level of conscience are driven by a higher sense of purpose. To these leaders, leadership is more about making a difference and the betterment of mankind. To them, progress is not just about economic objectives. It is more about collective well-being and achieving something meaningful,” she says.

She was delivering her lecture entitled “The New Malaysia: Navigating the Journey towards Convergence”. She added ‘ having change and not managing the convergence that should come after it is analogous to planting a tree and then not watering and tending to it. How then do we create this convergence?’.  She added ‘Convergence exists when various aspects of our existence are consistent and aligned in a synergistic manner to enable the attainment of intended objectives. The opposite is divergence where various aspects of a society are in contradiction with each other.’

Dr. Wan Azizah who briefed the audience in beginning of her speech about the history of Malaysia and various past outcomes of socio-political change. She told  the audience at Qatar University the steps taken following periods of change are of particular importance.

She said ‘An economy cannot build sustained competitive advantage if we under-invest in human capital development.’ Dr. Wan Azizah argued that Malaysia has to be built around a new paradigm. This new paradigm she is referring to is building a sense of fraternity in humankind, a notion she says, that is inspired by the Madinah constitution. “When the Prophet Muhammad SAW formulated the Madinah constitution he declared “kana ummatan wahidah”, verily this is one nation.”

Earlier, in his welcoming note, Dr. Hassan Al-Derham, President of Qatar University said, “QU prides in developing cooperation agreements and memorandums of understanding with various international universities, including universities in Malaysia. This comes from the role that Qatar University is playing on a local, regional and international level despite being a relatively young university. Performance indicators such as the 2018 QS ranking that ranked the university 36 in the “QS Top 50 Under 50” proves as a testament to Qatar University’s achievements by global standards.”

Dato’ Seri Dr. Wan Azizah Wan Ismail is a Malaysian politician and the former president of Parti Keadilan Rakyat (People’s Justice Party). She was the Member of Parliament for Permatang Pauh from 1999 to 2008. She was also the Leader of the Opposition in Dewan Rakyat from March to July 2008. She resigned from her Permatang Pauh parliamentary seat on 31 July 2008 to make way for her husband Datuk Seri Anwar Ibrahim who won the subsequent by-election on 26 Aug 2008.

In 2014, she became the state assembly person for Kajang and once again a Member of Parliament for Permatang Pauh after Datuk Seri Anwar Ibrahim was sentenced to five years of prison by the Court of Appeal. She stood as a candidate in the 14th general elections and won, becoming the Member of Parliament for Pandan and due to the victory of Pakatan Harapan in the elections, she became the Deputy Prime Minister of Malaysia. She also holds the portfolio of Women, Family and Community Development Minister.