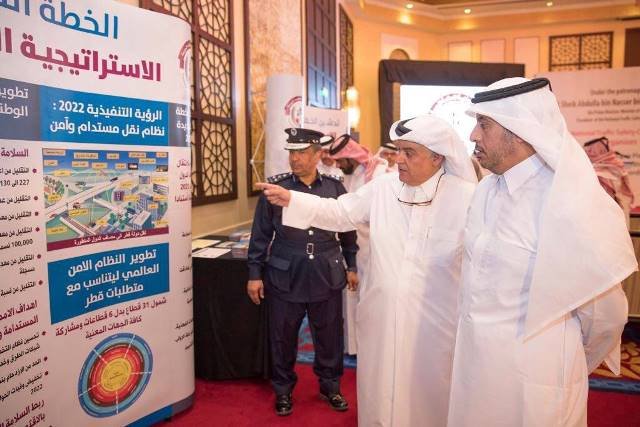 The forum started with the message of United Nations Secretary General’s Special Envoy for Road Safety, Jean Todt. He lauded the efforts made by Qatar and concerned authorities to reduce the number of deaths due to road accidents and to achieve the sustainable development by 2030. He underscored that the indexes indicate Qatar has been moving towards the right direction that helped Qatar to be placed at the forefront of Middle East countries in reducing the number of road accidents.

There are three major challenges identified by the United Nations facing the countries of the world: traffic safety, cities and congestion, the economy and national security. There is a close relationship between these challenges that need great efforts to handle.  The United Nations has issued its resolutions, which called on countries to reduce the number of deaths by 50% globally by 2020 and adopt the goals of sustainable development, He added.

He said that since the launch of the National Road Safety Strategy in January 2013, the State of Qatar has been able to occupy a prominent position at the global level in this area.

Brig. Muhammad Saad Al Kharji, Director General of Traffic said that the second action plan of traffic safety strategy would be inclusive by the contributions of stakeholders and the community, as well as scientific through the development of the global security system adopted by the United Nations to meet the requirements of fast-growing countries such as the State of Qatar. It ensures effectiveness by linking road safety to the United Nations goals of sustainable development, economic growth and national security of the State.

He added that Traffic and Transport Sectors are two complex sectors that require joint action to implement and develop the national strategy for traffic safety to build our modern state.

Brig. Muhammad Abdullah Al Maliki, Secretary of National Traffic Safety Committee said that the conformity of security and safety of the transport of individuals and goods constitutes the backbone of the development of society because of their relationship with the requirements of citizens and facilities of daily life. The progress of States has been measured by the level of efficiency of their transport system and the extent to which they meet the requirements of economic and social growth. Strategic planning has become the basis for the development of countries through a far-sighted vision that takes into account all the requirements and factors of development and progress.

The National Traffic Safety Committee has taken the responsibility for transforming the vision of Qatar’s high leadership into a reality that meets the aspirations of its citizens and responds to the comprehensive renaissance phase witnessed by the State in various vital sectors, especially the transport and traffic safety sectors, he added.

In order to improve the performance and quality assurance in the implementation of the second phase of the strategy, Prime Minister and the Minister of Interior, who is also the Chairman of the National Traffic Safety Committee, has entrusted the Secretariat to organize the fifth forum of coordinators with the cooperation of all concerned parties, in order to learn about the positive and negative aspects of the first phase of the strategy and required improvement in the second phase.

Prof. Kim Jraiw, Manager of the National Road Safety Office, pointed out that the implementation plan for the second phase is based on a number of pillars. They include the directives of  the Chairman, the recommendations of the National Committee, the decisions of the Council of Ministers and United Nations ratified by the State of Qatar, lessons learned from the first phase and development of the monitoring and evaluation system.

He pointed to the development of the role of the National Road Safety Office, which provides monthly reports to the Office of the Prime Minister and Minister of Interior on the progress of the concerned bodies.