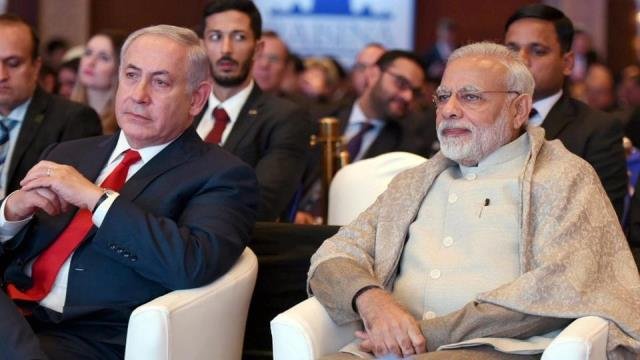 India and Israel are an “alliance”, said Israeli Prime Minister Benjamin Netanyahu during his inaugural address at the annual Raisina Dialogue in New Delhi on Tuesday.

The two countries officially hold each other as “strategic partners,” a stand reiterated in the joint statement of Netanyahu and Prime Minister Narendra Modi released a day before.

In a speech outlining the sources of national power, Netanyahu said democratic values were the “most important” source of power. “If we are to live in a world that protects democratic norms,” he said, countries such as India and Israel needed to form an “alliance to secure our future.” He also underlined the challenge of “radical Islam and its terrorist offshoots” to the “quest for modernity”.

He said Modi spoke often of the need to secure democracy. “We have discussed how we can strengthen relations of our two countries in security, in civilian areas and every area,” he said, before ending with the line “god bless the India-Israel alliance.”

Earlier in his speech, Netanyahu described India as “one of the great powers of earth”. He cited military capability as the first requirement of national power, noting that in Israel’s case this included considerable investment in intelligence to “compensate for our size.”

Military and intelligence, however, was expensive and therefore this required economic power. This in turn required education. Israel’s own defence forces, he said, were a “giant education machine.” But to convert innovation into economic might needed a free market environment that allowed firms “to do business and add value to the economy.” He cited the growing convergence of big data, connectivity and artificial intelligence. “Countries that seize the future are those that innovate along these lines,” he said.

He spoke of “political power”, “the ability to build relationships and alliances with other countries” before citing values and democracy as the fourth pillar. He said Israel’s long struggle to survive had led it to understand a lesson: “The weak don’t survive, the strong survive.” He noted that “you make peace with the strong, you make alliances with the strong, you are able to maintain peace by being strong.”