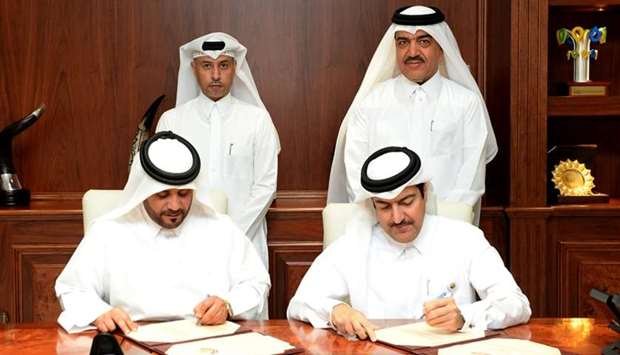 A lease contract for two plots of land for labour accommodation has been signed between the Ministry of Municipality and Environment (MME) and Barwa Real Estate Company. The signing ceremony took place at the MME headquarters in the presence of HE the Minister of Municipality and Environment Mohamed bin Abdullah al-Rumaihi, and HE the Minister of Administrative Development, Labour, and Social Affairs Dr Issa bin Saad al-Jafali al-Nuaimi.

The contract was signed by Mohamed Ali al-Khuri, acting assistant undersecretary for the public services affairs at the MME and Salman Mohamed al-Mohannadi, Barwa CEO.

According to the contract, the MME will lease two government land plots. One of them is of 994,476sqm designated to be used in the building of permanent units of labour accommodation in addition to the related facilities such as administrative offices, a mosque, health centres, services centres, commercial shops, storehouses, playgrounds and other services.

The other plot is of a space of 184,538sqm designated to build workshops for building blocks and bricks, and mixing concrete and asphalt that would be used for the building project in the first plot, and then it would be utilised as bus station. The duration of the contract is 27 years starting from the date of signing the contract and includes two years for the construction of the project and its completion, and 25 years for operations and investment.