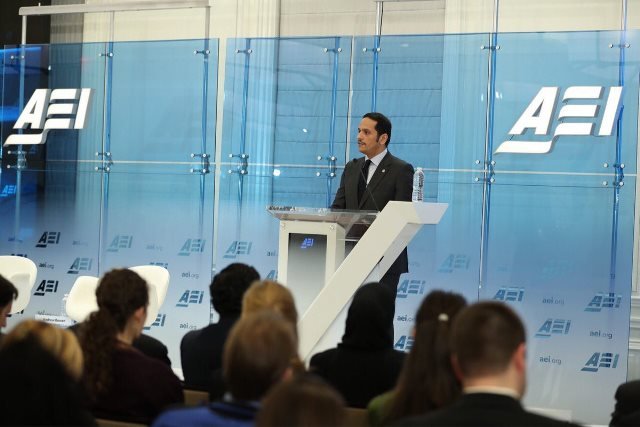 Sheikh Mohammed bin Abdulrahman Al-Thani, Foreign Minister and Deputy Prime Minister of State of Qatar expresed his hope for a restored GCC which is more transparent and based on shared interest like trade and security. He also highlighted the State of Qatar’s resilience and survival under the siege in his address at the American Enterprise Institute (AEI),

He also expressed hope that the international community will join in calling for an immediate regional strategic dialogue to agree upon common principles of coexistence, which can serve as a foundation to healing and ultimately prosperity for the region.

Qatar’s top diplomat began his speech by expressing hope that he can shed light on the current turmoil in the Middle-East and how aggressive forces in the region threaten Qatar’s interest and ultimately threaten U.S. interests. He also hoped he can provide ideas for how to move forward towards a more stable situation.

Foreign Minister and Deputy Prime Minister of State of Qatar said that the U.S. and the State of Qatar have been allies for 45 years. During that time, the two sides signed dozens of agreements that memorialize their commitment to each other.

He then turned focus to last week’s meeting between the two countries for a historic strategic dialogue, which took place in Washington. The dialogue led to the signing of five agreements in many fields. They included agreements to defend the cyber security of the critical infrastructure for energy, strengthening trade, investment, and technology, developing international law enforcement to stop human trafficking, and continued joint defense commitments.

He highlighted that the State of Qatar and the U.S. enjoy a unique partnership and noted that the State of Qatar welcomed U.S. troops when the country was looking for a home for them in the Middle-East. Qatar now hosts the largest US military foreign air base in the world. He told that there are 11,000 U.S. troops, thousands of American teachers and students, and hundreds of US-owned companies living and working in Qatar

He mentioned that Qatar and the U.S. base were strategically located as they are surrounded by powerful players in the Middle East. HE the Foreign Minister and Deputy Prime Minister highlighted that some of the nations in the region were on intimidation, aggression, and dangerous flirtations with war. He added that those nations were feuding for domination, taking as prisoners not just the neighbors they bully. The Foreign Minister noted that The suffering inflicted by these power-hungry forces is not limited to the starvation and devastation in places like Yemen, Syria, and Somalia. The well-being of citizens within these dominating regimes is also being sacrificed in the power grab.

Foreign Minister and Deputy Prime Minister of Qatar, Sheikh Mohammed bin Abdulrahman Al-Thani said that “the illegal blockade started last year against Qatar is one of many instruments of sabotage intended to bully my country into submission.”

The world is discovering that the blockading states will stop at nothing: illegal market manipulation, military aggression, humanitarian assaults, silencing of dissenters, weaponing propaganda, and undermining the global fight against terrorism,” he added.

HE the Foreign Minister then moved to discuss Qatar’s resilience in the face of the siege, and highlighted that other countries might not be able to deal with such attacks as have been seen in “in example after example across the region.”

He warned that “the worldwide and long-term danger of aggression will eventually reach countries around the globe because these rulers will stop at nothing: intentional, international destabilization of the energy and financial markets; and worse, by laying the groundwork for the next generation of terrorism.”

He said that “terrorism flourishes in oppressive, closed regimes, where the needs and rights of the citizens are not met. While many reckless leaders surrounding us double down on hidden and oppressive means of governance, Qatar and many other nations in the Middle East hope to keep developing into nations that can provide justice and security to its citizens.”

“As I told Secretaries Tillerson and Mattis yesterday, Qatar sees the U.S. as a critical part of that vision. Ending the turmoil in the Middle East will take further leadership,” he added.

He stressed that cooperation between all countries in the Middle-East to regain security will be vital. “Qatar and the US have been fighting terrorism together for many years. We agree that terrorism must not only be destroyed through military efforts, but also by lifting up the oppressed with a vision of openness and hope through lasting social transformations.”

He warned that imposing repression over reform and development, using the law of power instead of the power of law, is detrimental to the global counter terrorism efforts. He said that “the U.S., Qatar, and the other 72 members of the coalition against ISIS have spent years crushing this evil. We do’nt want to find ourselves in the same situation again and again. We need to work together to completely end terrorism financing, recruitment, propaganda, and extremist ideologies.”

He said that wise leadership means putting aside personal feelings to help the good of the people. He added that it is Qatar’s hope that the GCC can be rebuilt. The citizens of Qatar are a forgiving and resilient people.

“We wish for unity. We cant ignore the historic bond between the countries of the GCC, and the shared family, cultural, and financial ties that can actually make us stronger. Qatar hopes for a restored GCC which is more transparent and based on shared interest like trade and security.”

Qatar’s Foreign Minister stressed that the State of Qatar hopes for a restored the GCC that would have “a clear process for raising and resolving differences; would need to be void of forced compliance regarding foreign policy and decisions concerning domestic affairs; would need to be governed by reason over impulse; and would need to serve the best interest of all its members.”

As for the Middle-East as a whole, Foreign Minister and Deputy Prime Minister said that the devastated areas cannot be rebuilt “unless more diplomatic pressure is put on power-hungry players; and a holistic security plan is established across the region. This security plan must find common ground, include an arbitration mechanism that gives small and large nations equal protection, and provide binding consequences for those who create crisis and threaten security.”