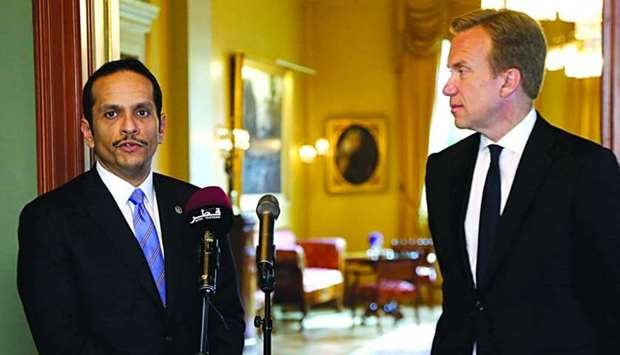 Both discussed bilateral relations, means of boosting and developing them as well as developments of the Gulf crisis and a number of regional and international issues of mutual interest.

Sheikh Mohamed thanked Brende for his country’s position calling for the dialogue among all parties. He also briefed on the humanitarian impact of the Gulf crisis. In this regard, he referred to the National Human Rights Committee’ s record of cases including involving family dispersal, especially women and children, and racial discrimination against Qatari students.

He briefed Norwegian foreign minister on the status of Kuwaiti mediation, stressing Qatar’s positive interaction with it.

Qatar Foreign Minister expressed Qatar’s keenness to enhance the prospects of co-operation with the Kingdom of Norway.

Doha, 25 June 2022 THE Embassy of Nepal and the Non-Resident ...
END_OF_DOCUMENT_TOKEN_TO_BE_REPLACED