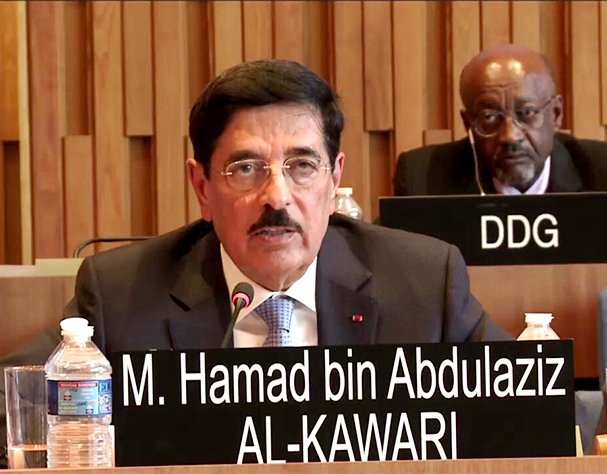 Dr. Hamad bin Abdulaziz AL Kuwari, advisor at the Emiri Diwan and Qatar’s candidate for the Director General post at the United Nations Educational, Scientific and Cultural Organization (UNESCO), presented his vision for the organization in presence of 58 members of UNESCO’s Executive Board chaired by Germany’s Michael Worbs.

Dr AlKuwari stressed UNESCO’s mission in establishing peace, saying that UNESCO was founded for peace and it should carry on for it. He said that throughout his educational and professional career, he was able to learn and talk with different cultures, and live the wealth of humanitarian experience in building civilizations and constantly looking for peace.

He touched on the current challenges of UNESCO, saying that despite the numerous successes, there is a decline in public awareness of its role, which affected cooperation with it. He said that some challenges are political due to the lack of consensus that most of UNESCO’s decisions were based on, which resulted in the current financial crisis.

Dr. Al Kuwari spoke about the role of education and the need to provide it to all deprived children across the world because there is no development with out education and the participation of literate women, highlighting the importance of critical education and the development of programs to instill humanitarian values such as tolerance and interaction among civilizations so as to dry up the intellectual sources of terrorism.

On UNESCO’s role in areas of Science and Technology, challenges and benefiting from its experts and scientists, told his program of partnering with scientific groups to establish UNESCO as a home for scientists and experts from all over the world.

Dr. Al Kuwari said the space must be given to such talents in order to create innovative scientific and knowledge products so as to address the problems of development through technological research, highlighting the role of sciences in deepening ties between scientists and experts in issues related to humanitarian issues so as to work to limit the impacts of natural disasters such as floods, earthquakes as well as climate change and water problems.

He touched on his vision for the importance of world heritage, promising to carry on preserving it and protecting it from destructive hands and calling for legislation to protect mutual heritage as UNESCO serves as the legitimate incubator for such laws.

The Qatari candidate highlighted UNESCO’s role in dialogue among civilizations and means of boosting it through contacting global intellectuals, knowledge circles and open media as well as using modern technology to communicate with young people and encourage them to realize the goals of UNESCO, stressing the organization’s mission in protecting freedoms, establishing freedom of expression, defending journalists and innovators who face aggression in conflict zones.

Dr. Al Kuwari said he will do his best to develop the organization by cooperation with the General Conference, the Executive Board and staff, whom, he said, must have all obstacles removed so that they can do their job and achieve its noble goals.

He proposed a fund for small industries to support deprived and needy countries, saying that he discussed the idea with a number of businessmen and they are ready to contribute, adding that the fund will be active from day 1 if he were to be elected director general.

UNESCO’s current crisis is political rather than financial. the Qatari candidate said, adding that it should be handled through a comprehensive strategy. He said decisions were used to be made through consensus and this approach must revive by electing a neutral director general.

After presenting his program to the Executive Board, Dr. Al Kuwari listened to the comments and questions of board members on challenges facing the organization and the candidate’s vision to address them.

Asked about measures he would take to achieve good governance for the organization, Dr. Al Kuwari said there is a need to re-consider the reforms that UNESCO did through consensual mechanisms for decision-making, noting that he received many complaints during his visits to many countries about the politicization of the organization, which, he said, calls for reform. He promised that member states will be given time to negotiate so that the final decision is accepted by all.

As for the means to de-politicize the organization while Dr. Al Kuwari himself belongs to the Arab region while there is an Arab-Israeli conflict, the Qatari candidate said the de-politicization of UNESCO isn’t an easy matter but at the same time responsibility must be shouldered instead of boycotting because that too would be an act of politicization.

Dr. Al Kuwari said he respects the decisions of the organization and being a director general necessitates being neutral, noting that he has previous experience in managing international issues at the United Nations as he was elected vice president of the Committee on the Elimination of Racial Discrimination as well as serving as president of the United Nations Conference on Trade and Development (UNCTAD) for four years.

A number of questions touched on the situation in African and Caribbean countries and the conditions of education there. Dr. Al Kuwari stressed his attention to these areas so that education would be accessible to all, especially in Africa, besides working to offer programs that ensure education for girls in a way that brings positive impact on future development and labor market. He underlined Qatar’s efforts in cooperation with the U.N. to launch the ‘Educate A Child’ program that helped in the education of 10 million children around the world, promising that education, particularly in Africa, will receive special attention as the cornerstone of development by cooperation between UNESCO and the African Union to achieve the best outcome.

On how to handle the current financial crisis, the Qatari candidate said he is working through his diplomatic ties to convince the countries that haven’t paid their financial dues to the organization as well as creating attractive UNESCO programs in the fields of education and culture to encourage strategic sponsors and partners. He also proposed a Davos-like conference to discuss means of solving problems and finding the proper solutions, adding that he will hold talks with the United States to discuss its responsibilities towards UNESCO in terms of achieving the organization’s goal of global peace.

UNESCO has a significant role in combating terrorism, the Qatari candidate said, noting that military action isn’t enough and UNESCO plays a major role in this regard because terrorism can’t be eradicated without overcoming poverty and ignorance, boosting awareness of the importance of education, and spreading multi-cultural-ism.

He added that the position is not the goal for him or Qatar but rather serving the international society and working to implement new programs that contribute to spreading peace, awareness and empowering the innovative energy of youths.