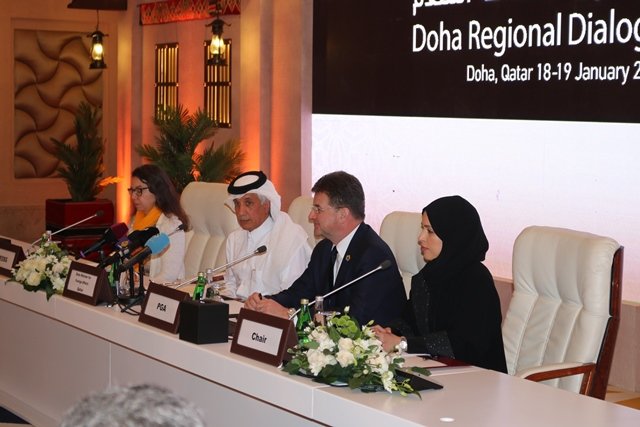 Sultan bin Saad Al Muraikhi, Minister of State for Foreign Affairs, State of Qatar said the State of Qatar is proposing to hold a global conference on preventive diplomacy and is ready to host it out of its belief in the importance of the firm role that preventive diplomacy plays as a main pillar in the vision of the U.N. Secretary General and Doha’s sense of responsibility to support his efforts and the success of his initiatives to achieve peace.

Speaking at the Doha Regional Dialogue on Sustaining Peace, AlMuraikhi said that the proposed conference would support the contents of secretary general’s message addressed in welcoming 2018, which highlights the danger due to the absence of peace and the aggravation of challenges in the world.

Al Muraikhi said the global community is facing serious threats and obstacles regarding international peace and safety. These threats puts the United Nations, as an entity for collective security, in a real test for achieving peace in the world, he added.

Qatar Minister said that peace does not only mean no wars, but also means respecting legislations, human rights and handling rising tensions that are a result of all types of conflicts that haven’t been fairly settled.

He reiterated that peace is only achieved with justice and balance in meeting the interests of different countries regardless of the size of their wealth or their geographical area. When justice is not met the results are conflict and instability, he said, and peace will not be achieved if there is greed and if international legitimacy is not met, international relations will be based on power which will resort to politicization of the law to justify its use.

Al Muraikhi said the international community is in dire need to adopt a more comprehensive perception with regards to dealing with international safety and security issues from a preventive stance, where it will work on treating reasons and conflict roots to prevent their outbreak, taking into consideration the organic relations between peace, security and development.

Based on its belief that peace sustainability is a shared responsibility between nations, and requires the efforts of all countries to find fair solutions for obstacles that face achieving peace, the State of Qatar has adopted a policy that is based on staying loyal to the commitments dictated by its partnership with the U.N. to achieve the goals and purposes of that charter, he said.

The Minister added that Qatar’s commitment to achieve peace and its sustainability is reflected in the policies and steps taken by it within the framework of international cooperation on all issues that are important to the international community.

Al Muraikhi reiterated Qatar’s commitment to implement the U.N. development plan 2030 and described it as a plan for development and peace that complies with Qatar’s policies in supporting the pillars of peace, promoting human rights, addressing inequality, achieving justice, combating corruption and consolidating noble human values such as freedom of speech and the right to participate in decision making.

He said that the mentioned elements are among the priorities of the State of Qatar and the pillars of its policy and National Vision 2030, which focuses on developing the Qatari citizen and promoting the value of human beings as a main aspect of the state strategy.

That strategy, he said, has succeeded under the wise leadership of Emir of Qatar  Sheikh Tamim bin Hamad Al-Thani to go a long way towards achieving these elements on all fronts, including the protection of the rights and dignity of those living in Qatar, achieving their hopes and ambitions of prosperous life, in addition to reaching a high level of human development stemming from the state’s solid belief that the issue of human development is a priority for the public interest and a basic condition for achieving peace, security and tolerance.

HE the minister of state for foreign affairs expressed the State of Qatar’s pride in building its national institutions that have succeeded in implementing state plans to realize a society of comprehensive justice. He pointed out that Qatar has become one of the safest countries in the world despite its presence in a turbulent region. It also enjoys a leading status in terms of respect for the rule of law and promoting sustainable development, as reflected in the global indicators of human development.

Al Muraikhi in his speech said that the Doha Regional Dialogue on Sustaining Peace is of special importance to the region at a time of great crisis and pressures. It is regrettable and painful for the peoples of the region, he said, that the it has changed from a region of peace and coexistence to a turbulent one dominated by disasters and humanitarian tragedies.

He noted that countries of the region and the international community have not done enough to prevent the aggravation of those crisis despite the early signs of their intensification, primarily because of the region’s lack of systematic investment in prevention and failure to address the underlying drivers of conflicts.

Al Muraikhi said that achieving peace will only happen through cooperation and peaceful coexistence, adding that neglecting the rule of law and unaccountability for tyranny and aggression were main reasons for the escalation of conflicts, crises, extremism and terrorism.

He noted that the vision of the State of Qatar in this regard is a comprehensive one that places at the top of its priorities systematic prevention, mediation and conflict resolution. According to this vision, he said, the state makes huge contributions to human development in order to provide education and economic development in the region because education is seen as a main tool for peacebuilding and conflict prevention, making the state commit to educating seven million children and providing economic empowerment to half a million young people in the region.

In this regard, he noted that the State of Qatar has cooperated with the United Nations to promote employment opportunities for young people through capacity building and launching programs to prevent violent extremism.

Minister of State for Foreign Affairs of Qatar said that based on the State of Qatar’s experience in resolving conflicts and its partnerships with U.N. institutions, Doha emphasizes that prevention requires open and transparent institutions that provide security, justice, education, health, infrastructure and other basic services as a basis for peace and progress, and the requirements for maintaining peace are combating corruption, good governance, transparency and accountability.

Al Muraikhi expressed his delight with the State of Qatar’s achievements in this field as it is referred to as one of the best countries in combating corruption. Qatar established in 2011 the first regional Rule of Law and Anti-Corruption Center (ROLACC) in partnership with the United Nations.

The Minister said that the State of Qatar has focused on mediation as a key instrument for achieving peace and resolving disputes by peaceful means, which enabled it to resolve many conflicts in the region. He reaffirmed the importance of mediation at the national, regional and international levels in order to achieve the peace that Doha aspires to in view of the urgent need for international community to prevent and resolve conflicts by peaceful means, eliminate the symptoms and causes of conflicts engines, and seek comprehensive solutions.

He pointed out that resorting to repression and escalating violence without a strategy for peace will exacerbate the crisis, and that regional organizations should be the platform in which constructive ways of returning to peace were discussed and effective measures taken to address the root causes of conflict in accordance with its role as affirmed in the U.N. Charter.

Al Muraikhi called for listening to young people in particular who are the future makers and whose problems lie in the context of the ongoing crises throughout the Middle East and North Africa, where they have demanded change, which is the instrument of progress towards a promising future for next generations, calling for rapid progress in order to prevent chaos forces from negatively exploiting this thirst for change.

He added that the State of Qatar continued to provide initiatives to support young people to work and engage in the economic development of their societies, praising the efforts of Silatech to support youth issues in the region, finding solutions to their problems and keeping them away from extremism and violence.